The U.S. Air Force Is Still Quietly Killing off the A-10 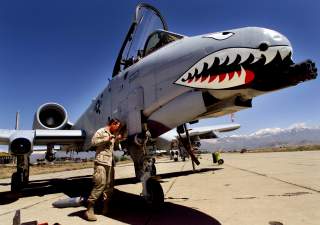 The Air Force is putting on a great publicity show for their impending Light Attack (OA-X) experiment. Officially, this small-scale experiment is meant only to demonstrate the capabilities of four low-cost, off-the-shelf, lightly armed aircraft against lightly defended enemies like ISIS or the Taliban. Quite unusually, General David Goldfein, the Air Force chief of staff, is planning on personally attending later this summer when the A-29 Super Tucano, AT-802L Longsword, Textron Scorpion, and AT-6 Wolverine will compete to potentially become the newest addition to the fleet.

The recent media blitz for this summer’s experiment is not coming out of the blue. For more than two years Air Force headquarters staff officers and others have been laying the foundation for the light attack program, lauding a buy of 300 or so light attack aircraft to relieve the expensive operating-cost burden of the A-10s, F-16s, and F-15s currently flying attack missions in permissive air defense environments like Syria, Iraq, and Afghanistan. Responding to the Air Force’s encouragement, three defense contractors—Sierra Nevada, Textron, and Beechcraft—started publicity and lobbying campaigns for their respective light attack offerings. In February this year, General Goldfein suddenly requested an $8 million supplemental to fast-track his newly announced Light Attack Experiment so it could take place this summer. A month later, Senator John McCain (R-AZ) put out his 2017 “Restoring American Power” defense plan advocating the 300 OA-X buy. Last month his Senate Armed Services Committee authorized $1.2 billion in the FY 2018 budget to start the OA-X procurement, though this money is contingent on the unlikely ending of the sequester cap.

It is rather strange to see the Air Force suddenly taking an interest in low speed, cheap turboprop and turbofan planes, especially in light of their having killed a nearly identical OA-X program in 2008. There is good reason to believe that, coming on the heels of their do-or-die efforts to fund the $150 million F-35s and $550 million B-21s, the Air Force’s newfound interest in $20 million OA-Xs is not really about saving the taxpayer a few flying-hour dollars in the ongoing war budgets. Instead, official enthusiasm for the OA-X appears to be the newest wrinkle in the USAF’s relentlessly continuing campaign to shut down the A-10 fleet and quash forever the concept of a dedicated close air support force with truly expert pilots.

According to several sources inside the Air Force, the service will push ahead with the light attack tests and eventually select one of the airframes for procurement. The acquisition of the selected OA-X will then be dragged out over years. In the meantime, the Air Force will request permission to divest increasing numbers of A-10s to free up funds to purchase the new aircraft, while using the justification that it makes the A-10 redundant. The A-10s will be sent to the boneyard where they will quickly be scrapped, thus ensuring they can never again be brought back into service. Once the A-10’s demise is a fait accompli, the light attack plane program will be quietly canceled. This may seem rather conspiracy-minded, but the Air Force has repeatedly attempted to rid itself of the A-10 and the close air support mission only to be thwarted by public pressure and congressional injunctions.

This dovetails perfectly with the unfolding reality as the Air Force grounds more and more A-10s by deliberately cutting off production of replacement wings (needed to extend A-10 life into the 2030s), zero-funding essential replacement spares, and underfunding A-10 depot maintenance. Even as these words are being written, the Air Force is dismantling the boneyard’s last 20 remaining intact A-10Cs, using as an excuse the lack of in-production replacement wings.

An Exercise in PR Duplicity

Last September Air Force Secretary Deborah James announced that, in deference to Congressional mandates, the Air Force would delay by years the retirement of the A-10. In October, the chief of Air Materiel Command, General Ellen Pawlikowski said the A-10 would be “…another airplane that we are sustaining indefinitely.” In February this year, General Goldfein told Business Insider that the A-10 was safe until 2021. In the following months, other generals weighed in with similarly soothing statements. Neither the Secretary nor the generals bothered to mention that in September, at the very beginning of this crescendo of reassurances, the Air Force had already deliberately ended the contract for re-winging the A-10s at just 173 wing sets—instead of exercising the contract’s option to re-wing the remainder of the nine-squadron, 283-plane fleet, a life-extending fix essential to meeting the 2017 Congressional mandate to keep 283 Warthogs flying.

Then, at a House Armed Services Committee hearing this June, the other shoe dropped. In the process of reassuring the Committee about the future of the A-10, Air Force Lt. Gen. Arnold Bunch let it slip that the Air Force planned to sustain 6 squadrons of A-10s. Representative Martha McSally (R-AZ), a retired A-10 pilot, caught something the rest of the committee missed: six A-10 squadrons are three less than the nine now flying. In other words, the Air Force intended to quietly cut three squadrons.

In a follow-up formal Request for Information (RFI), McSally asked the Air Force to detail how, if given funding by the Congress, they planned to finish the re-winging project. Air Force Headquarters responded by saying they were budgeting to keep only 173 A-10s (i.e. six squadrons) in service through 2030. When and if given the funding needed, the RFI response says the Air Force must now re-compete any new re-winging contract (without mentioning that they intentionally ended the old contract, thereby hitting the taxpayer with an extra $80 million or so in new start-up costs). Allegedly selecting a source would require another two years, followed by delivery of the first new wing set in 2022 and the last in 2029. Bear in mind, this is to produce an existing replacement part that was in production at more than 16 wing sets per year until just ten months ago. The Air Force’s RFI response goes on to say that most of these slowly arriving replacement wings will be unneeded because their recipient A-10s will have been replaced, presumably by F-35s. In other words, the Air Force leadership is so intent on getting rid of A-10s that, even if re-winging funds are provided, they will be unwilling to keep A-10s flying—in direct defiance of the 2017 National Defense Authorization Act, which barred the Air Force from using any money to retire any A-10s.

The same NDAA also required the Air Force to submit a plan to “prevent the permanent removal of any active inventory A-10 aircraft from flyable status due to unserviceable wings.” So far, the Air Force hasn’t delivered on that either.

In 2017 Congress also ordered the Air Force to submit a report addressing any F-35 close support shortfalls that may be uncovered during the impending F-35/A-10 operational fly-off tests before the service even considers retiring any more A-10s. These tests, if completed as realistically as currently planned, will determine if the F-35 is as combat-effective in the close air support role as the A-10. This is of major importance to the F-35 program because performing close air support as well as or better than legacy aircraft is one of the key contractual requirements of the entire F-35 program—and because the NDAA mandated that no A-10s be replaced until the F-35 demonstrates at least equal close support capability. In view of the F-35’s limited CAS-suitable payload, poor low-speed maneuverability, short loiter time, major gun inadequacies, and high vulnerability to ground fire, the fly-off test is likely to show the F-35 to be significantly inferior to the A-10 for the CAS mission.

In view of this obvious danger, Air Force leaders have long been denying the need for this particular test and slow-rolling the delivery of essential instrumented airframes and range equipment, clearly in the hopes that the test can be stalled or cancelled. Former Air Force Chief of Staff (and current Northrop Grumman director) Mark Welsh famously dismissed the tests as a “silly exercise.”

Air Force contempt for the close air support mission was on clear display during an October 2015 hearing when then-program executive officer Air Force  Lt. Gen. Christopher Bogdan said he didn’t want to go through with F-35/A-10 fly off, preferring instead to test the F-35 by itself “in a realistic operational environment for the CAS mission that the Air Force intends the F-35 to do,” he said.

That statement almost perfectly encapsulates the longstanding, deeply ingrained culture of indifference to close support within the upper ranks of the Air Force, a culture that dates back to well before WWII.

Hardly anything could be more irrelevant than how the Air Force “intends” to conduct close air support. Any preferences of the Air Force with regards to close air support come a distant, hazy second to the needs of the troops fighting on the ground. The needs dictated by actual ground combat are the real crux of the close support debate, something the official Air Force has been eager to suppress from early Army Air Corps days on.