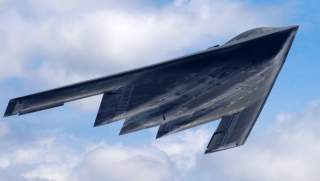 Secrecy and classification parameters of Air Forces' new "in-early-development" next-generation B-21 Raider stealth bomber will be analyzed by the Pentagon's Inspector General to investigate just how many details, strategies and technological advances related to the emerging platform should be highly classified.

While Air Force developers say the long-range bomber is being engineered to have the endurance and next-generation stealth capability to elude the most advanced existing air defenses and attack anywhere in the world, if needed, very little about the bomber has been released by the Air Force or discussed in the open public. Perhaps that is the most intelligent and "threat-conscious" approach, some claim. Nonetheless, Congress directed the Inspector General to conduct and inquiry into this issue, asking if there is sufficient transparency and communication about the new weapon.

Lt. Gen. Arnold Bunch, Military Deputy, Office of the Assistant Secretary of the Air Force for Acquisition, told reporters May 15 that the service hopes to "balance program classification with the transparency we are shooting for to make sure we are not releasing too much or hindering too much information flow. They are analyzing what should be released."

The Air Force of course wants to maintain the openness needed to allow for Congressional oversight while ensuring potential adversaries do not learn information about advances in stealth technology and next-generation methods of eluding advanced air defenses. Such is often a challenging, yet necessary balance. Pentagon developers have often said there can be a fine line between there being value in releasing some information because it can function as a deterrent against potential adversaries who might not wish to confront advanced US military technologies in war. At the same time, US commanders and Pentagon leaders of course seek to maintain the requisite measure of surprise in war, meaning it is also of great value for the US military to possess technological advantages not known by an enemy.

Furthermore, funding, technology development and procurement questions related to the new bomber are also subject to extensive Congressional review; the question is whether this should be limited to only certain select "cleared" committees - or be open to a wider audience.

While the Air Force has revealed its first sketch or artist rendering of what the B-21 might look like, there has been little to no public discussion about what some of its new technologies may include. Analysts, observers and many military experts have been left only to speculate about potential advances in stealth technology.

Bunch did, however, in a prior interview with Scout Warrior, clearly state that the new bomber will be able to hold any target at risk, anywhere in the world, at any time.

Bunch, and former Air Force Secretary Deborah James have at times made reference, in merely a general way, to plans to engineer a bomber able elude detection from even the best, most cutting-edge enemy air defenses.

Nevertheless, James and other service developers have added that the new bomber will be able to “play against the real threats.”

Although official details about the B-21 are, quite naturally, not available - some observers have pointed out that the early graphic rendering of the plane does not show exhaust pipes at all; this could mean that the Air Force has found advanced "IR suppressors" or new methods or releasing fumes or reducing the heat signature of the new stealth plane.

The Air Force has awarded a production contract to Northrop Grumman to engineer its new bomber. The next-generation stealth aircraft is intended to introduce new stealth technology and fly alongside - and ultimately replace - the service’s existing B-2 bomber. Beyond these kinds of general points, however, much like the Air Force, Northrop developers have said virtually nothing about the new platforms development.

“With LRS-B (B-21), I can take off from the continental United States and fly for a very long way. I don’t have to worry about getting permission to land at another base and worry about having somebody try to target the aircraft. It will provide a long-reach capability,” Lt. Gen. Bunch, Air Force Military Deputy for Acquisition, told Scout Warrior in an interview last year.

Stealth technology works by engineering an aircraft with external contours and heat signatures designed to elude detection from enemy radar systems. The absence of defined edges,  noticeable heat emissions, weapons hanging on pylons or other easily detectable aircraft features, radar "pings" have trouble receiving a return electromagnetic signal allowing them to identify an approaching bomber. Since the speed of light (electricity) is known, and the time of travel of electromagnetic signals can be determined as well, computer algorithms are then able to determine the precise distance of an enemy object. However, when it comes to stealth aircraft, the return signal may be either non-existence or of an entirely different character than that of an actual aircraft.

At the same time, advanced in air defense technologies are also leading developers to look at stealth configurations as merely one arrow in the quiver of techniques which can be employed to elude enemy defenses, particularly in the case of future fighter aircraft.  New stealthy aircraft will also likely use speed, long-range sensors and maneuverability as additional tactics intended to evade enemy air defenses - in addition to stealth because stealth configurations alone will increasingly be more challenged as technology continues to advance.

Although the new image of the B-21 does look somewhat like the existing B-2, Air Force officials maintain the new bomber’s stealth technology will far exceed the capabilities of the B-2.

The B-21 will be built upon what the Air Force calls an “open systems architecture,” an engineering technique which designs the platform in a way that allows it to quickly integrate new technologies as they emerge.