The U.S. Air Force's Incoherent Plan to Replace the A-10 Warthog 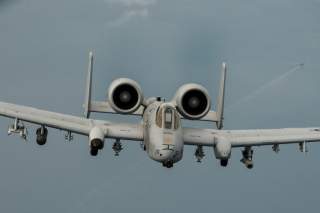 When the Air Force separated from the Army to become an independent military service after World War Two, it was understood that airmen would continue to provide vital combat support to soldiers on the ground.  Army aviation ended up consisting mainly of helicopters, but there are plenty of combat situations where only a well-armed jet can give soldiers the life-saving fire support they need.

The most dangerous mission the Air Force flies in delivering firepower to soldiers on the ground is called "close air support."  As the phrase indicates, it requires attacking hostile targets in close proximity to friendly forces (and sometimes noncombatants), which puts both the soldiers and the airmen at risk if operations are not carefully coordinated.  Close air support can sometimes be provided from heavy bombers using satellite-guided bombs, but the most effective approach often is to come after the enemy low and slow.

The Air Force operates a plane called the A-10 Thunderbolt II that was designed to do just that.  Built around a fearsome 30 mm cannon that can shoot 70 armor-piercing rounds of depleted uranium ammunition per second, it is the most lethal close air support weapon in the world.  Additional support is supplied by the F-16 Fighting Falcon, a fighter jet equipped with targeting pods and smart munitions for precisely attacking hostile ground forces.

The current Air Force plan of record is to replace both planes with the F-35A fighter, a stealthy "fifth-generation" tactical aircraft that is much more survivable than anything the Air Force has today for supporting ground troops.  The service expects to declare the F-35A operational later this year, and has recently confirmed to Congress its requirement for 1,763 of the multi-role jets.  However, behind the scenes, something very odd is happening with Air Force plans for future close air support.

On June 21, Lara Seligman of Aviation Week & Space Technology reported that Air Force planners want to buy two new aircraft for performing close air support -- neither of which is in its already oversubscribed modernization plan.  One, designated the OA-X ("O" for observation, "A" for attack, "X" for experimental), would look more like a P-51 Mustang left over from World War Two than a modern tactical aircraft.  The other, designated A-X2, is a replacement of the A-10 that supposedly would be more affordable to operate.

This is a truly foolish plan.  The propeller-driven OA-X would be configured mainly for "permissive" environments, meaning places where enemies have no air forces and no air defenses.  Those kinds of places are fast disappearing, because cheap surface-to-air missiles are ubiquitous in global military trade.  Nonetheless, the Air Force wants to conduct a "flyoff" of two readily available candidates later this year, and buy up to 250 of the lightweight, low-end planes.

The other plane, a jet, would be cheaper to operate than the A-10 -- which the Air Force says costs $20,000 per hour to operate.  If you have followed the service's past generation of cost data, then you know it has a tendency to always come up with the right numbers to justify whatever its plan du jour is.  In the case of close air support, that plan seems to change constantly.  Which is why it's a safe bet the A-X2 will never be built; some bright new idea will eclipse it long before anybody begins bending metal.

That's just as well, because the idea of building a jet that costs less to operate per hour than the A-10 conveniently ignores the expense of designing, competing, developing, testing and building any such aircraft.  Those costs would all have to be covered in the near-term by taking money out of other programs, whereas the operating costs of the A-10 are spread out over many years and come partly from supplemental war accounts.

With the Air Force already planning to buy a new bomber, tanker, fighter, trainer, radar plane and rescue helicopter at a time when federal deficits are surging back to over a trillion dollars per year, the A-X2 is unaffordable.  And it is unneeded: the A-10 can do the close air support mission better than any low-cost replacement by relying on upgrades that are already in progress.  It's an exceedingly tough plane, and the Air Force's contention that it costs more than a high-end fighter to operate simply isn't believable.

As for the propeller-driven OA-X, that seems emblematic of a service that has lost touch with what is required to stay ahead of future adversaries.  It's embarrassing that the Air Force would even suggest such an idea.  Fortunately, the Air Force Secretary and new Chief of Staff haven't yet weighed in on the concept, which raises the interesting question of why it is being briefed to outsiders.  They will have to decide whether they want to send the signal that the world's premier air force has rediscovered the virtues of the Mustang and Spitfire.

The worst thing about this dumb initiative is that it will distract service leaders from getting F-35 fighter production rates to a point where they can match the unit cost of fourth-generation F-16s.  For 15 years, the defense department and leading allies have been striving to field a stealthy strike fighter that could enforce global air dominance at an affordable cost.  Now, as the joint force is about to reap the benefits of that investment, a key player seems to have become confused by nonsensical ideas.  Whoever came up with this bad idea needs a new job.