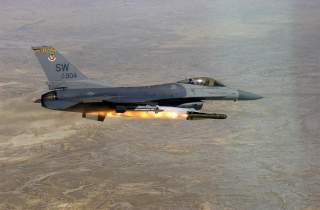 Much has been written about the transformation of the United States Air Force between the Vietnam War and Operation DESERT STORM. In his classic book Sierra Hotel, C.R. Anderegg documented the revolution in training that occurred at the Fighter Weapons School at Nellis Air Force Base during this era, led by the so-called “Fighter Mafia” of Air Force legends such as John Jumper, Ron Keys and Moody Suter. Steve Davies opened the door to the secret MiG program known as “Constant Peg” that occurred during the same time period in his book Red Eagles, while former Red Eagles Squadron Commander Gail “Evil” Peck gave his unique perspective on this historically significant squadron in his book America’s Secret MiG Squadron.

During this period the Air Force also invested heavily in weapons system modernization, highlighted by the development of the F-117, masterfully portrayed in Ben Rich’s Skunk Works. This period is again the subject of academic analysis, this time by United States Northern Command deputy command historian Brian Laslie in The Air Force Way of War. Laslie agrees with previous studies that the revolution in Air Force training, including the integration of training against real MiGs, and the development of new aircraft and weapons all played a major role in the improvement in Air Force employment in the post-Vietnam period. However, Laslie breaks with previous analysis when he identifies the development of the Red Flag exercise as the single most important improvement of that era. He argues Red Flag provided realistic training to aircrews, led to the development of airpower tactics that helped the Air Force dominate the skies above Iraq in DESERT STORM, and proved the viability of new technologies such as the F-117.

Laslie begins his examination of the Air Force’s changes after Vietnam by recapping the poor performance of the service during that air war. Through comprehensive research and analysis, the author provides a host of reasons for the Air Force’s disappointing performance, but he contends that the root cause was unsatisfactory aircrew training. “The single greatest problem faced by USAF pilots…was poor combat training prior to employment. This poor training reinforced poor tactics and doctrine during combat” (p. 29). Laslie argues that aircrews were unprepared to face newly produced MiGs and surface-to-air missiles deployed in Vietnam, and the inevitable result was the loss of hundreds of aircraft and aircrews.

The author argues that many combat veterans returned to the States after their deployments and were disgusted with the level of training they received prior to combat, and were determined to change what they saw as unacceptable preparation. Laslie discusses many of the same Air Force officers that were introduced in Anderegg’s Sierra Hotel. Both authors describe the environment of Nellis at the time, and the group of supremely gifted fighter pilots who plied their craft at the service’s tactical center of excellence.

During this era, then-Majors John Jumper and Ron Keys revolutionized aircrew training with their “building block approach” to training fighter pilots. The idea of a dedicated adversary force flying dissimilar aircraft from the ubiquitous F-4 spawned the development of the Aggressors. A highly classified program to fly and maintain Russian-built MiGs was beginning to take hold and expand, and a brilliant fighter pilot named Moody Suter nurtured the idea for a realistic large force exercise that would prepare fighter pilots for war. However, Anderegg and Laslie differ on one critical point: the influence of the contemporary general officer corps on these initiatives.

Anderegg gives the bulk of the credit for these programs to the determined effort of the so-called Fighter Mafia, often portrayed as fighting senior leadership to persuade them of the necessity of training improvements. Laslie agrees that these young officers were guiding forces behind the training revolution, but he differs from Anderegg in the role of senior Air Force leaders at the time. Anderegg portrays the Generals as risk-averse and indifferent at best, openly hostile at worst to proposed changes in Air Force training. Laslie uses a multitude of examples to show the senior officers that were instrumental in the improvements in Air Force employment and the development of these advanced training programs. Of note, the author discusses the vital role played by General William Creech, who pushed the envelope at Tactical Air Command in improving Air Force tactical employment and training.

“Creech’s importance cannot be overstated. Tactical doctrinal changes, more flying hours for pilots…and improvements to Red Flag were all hallmarks of his tenure as TAC commander” (p. 71). General Creech has been criticized in various texts in the last decade, and a generation of Air Force officers who have read and re-read Robert Coram’s Boyd: The Fighter Pilot Who Changed the Art of War have developed a hostile impression of General Creech, who was often at odds with the intractable John Boyd. Laslie’s text plays a crucial counterpoint to Anderegg and Coram, and gives readers a new understanding of the hard-nosed general who was determined to improve the quality of Air Force training and employment.

The real star of the book is Red Flag, a revolutionary training exercise that began in 1975. Reports on combat losses in Vietnam identified the initial 10 combat sorties as the most likely time a pilot would be shot down. Moody Suter believed that those first 10 “combat sorties” could be flown in a realistic combat training exercise, minimizing the risk and maximizing the lethality of inexperienced pilots. Laslie delves into the development and the rapid growth of the exercise in more detail than has been found in any previous examination of this period. The author identifies when and why new mission types were added (i.e. Suppression of Enemy Air Defenses [SEAD] and Combat Search and Rescue [CSAR]), and when new aircraft types were integrated into the Red Flag force.

Laslie uses interviews with fighter pilots of the time to describe the revolution that was Red Flag. “Word of Red Flag spread like fire through the fighter community. The response from participating crews was overwhelmingly positive. Pilots said it was the ‘most valuable training ever’ and the ‘most realistic since actual combat’” (p. 64). Previous accounts of the era have discussed the development of Red Flag, but none has captured its importance with the vibrant tone that Laslie has.

The author examines small-scale Air Force operations in the 1980s and concludes that the revolution in training had taken hold, and the service was much more effective in the conduct of air operations. But the true proving ground for the new training programs was DESERT STORM, which turned out to be the confluence of Air Force doctrine, training, and technical improvements. The tremendously successful air campaign would forever change the face of warfare; the conduct of the air war was shocking in its speed and effectiveness. U.S. and coalition losses were minuscule compared to air combat of the past. Laslie contends the revolution in Air Force training, in particular Red Flag, was the reason for the U.S.’s rout of Iraqi forces. “The pilots who fought during Desert Storm were by and large not veterans of combat…However, the group and squadron commanders, flight leads, and other pilots were far better prepared for their first combat missions than their superiors had been when they entered combat in the 1960s and 1970s” (p. 132).

Red Flag had allowed these combat rookies to operate like seasoned combat veterans. As a result, the once vaunted Iraqi air and air defense forces were systematically isolated and destroyed. New U.S. fighter aircraft and weapons, in particular the F-117, performed splendidly and received the preponderance of media coverage and praise during and after the war. However, it was the people that flew the aircraft, guided the weapons, and made decisions during the fog and friction of war that made the difference in DESERT STORM. “In the end, it was not technology that beat Saddam Hussein’s forces…The deciding factor was that U.S. pilots were simply better trained and better prepared to meet the threat that lay before them” (p. 150–1). The air war over Iraq validated the development and modernization of training programs such as the Fighter Weapons School, the Aggressors, Constant Peg and Red Flag.

Laslie tackles a period of Air Force history that has been skillfully examined by several air power experts. Yet the author is able to explore new ground, and truly provide the reader with a significant analysis of the importance of these revolutionary training events, in particular the Red Flag exercise. The Air Force Way of War should be considered required reading for air power historians and analysts, combat veterans and active duty Air Force operators. Laslie’s enthralling text makes it clear why Red Flag is still thriving as it approaches its 40th birthday.

Tyson Wetzel is is an Air Force officer and a graduate of the United States Air Force Weapons School, of which he was also an instructor. Tyson has deployed multiple times in support of Operations IRAQI FREEDOM, ENDURING FREEDOM, NEW DAWN, and NOBLE EAGLE. The views expressed in this article are the author’s alone, and do not reflect those of the U.S. Air Force, the Department of Defense, or the U.S. Government.

This piece first appeared in the Strategy Bridge here.