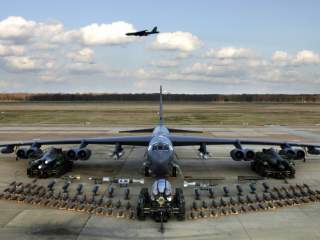 The U.S. military is considering developing a so-called “arsenal plane” to accompany stealth fighters into combat, hauling large numbers of munitions in order to significantly boost the stealthy planes’ firepower.

But Carter didn’t specify what kinds of weapons the arsenal plane might carry and whether they might include air-to-air munitions, which is where America’s arguably greatest firepower shortfall exists.

The arsenal plane, under development by the Defense Department’s new Strategic Capabilities Office, “takes one of our oldest aircraft platform and turns it into a flying launchpad for all sorts of different conventional payloads,” Carter said.

“In practice, the arsenal plane will function as a very large airborne magazine, networked to fifth-generation aircraft that act as forward sensor and targeting nodes, essentially combining different systems already in our inventory to create whole new capabilities,” Carter continued.

A Pentagon official told Aviation Week that the Strategic Capabilities Office, a kind of incubator for new weapons ideas that Carter established in 2012 during his tenure as deputy defense secretary, is considering adapting the B-1 or the B-52—or both—for the arsenal role. In the jet age, there have been many proposals to arm bombers with air-to-air weapons.

The benefit is obvious. At present the U.S. military fields just under 200 stealth fighters, including around 180 Air Force F-22s and just ten Marine Corps F-35Bs. While more F-35s are in production and the Air Force is on track to declare its F-35As notionally combat-ready in August 2016, even a larger stealth force could still find itself outgunned in an air battle with China over Taiwan or the disputed Spratly Islands in the western Pacific.

That’s because the F-22 carries just eight air-to-air missiles in its weapons bays in a stealthy configuration; the F-35 carries just two. Chinese Su-27 derivatives routinely carry ten or more air-to-air missiles. And in a Pacific air war, the close proximity of Chinese bases to any likely battle zone means that Beijing will probably be able to keep many more warplanes in the air—potentially hundreds more.

The end result is a huge firepower advantage for the Chinese. In one 2008 study, the RAND Corporation, a think tank closely aligned with the U.S. Air Force, optimistically assumed that an F-22 would never miss when it fired an AIM-120 missile at a Chinese fighter and, by contrast, Chinese fighters would never hit an F-22 with their own missiles.

While unrealistic, that handicap didn’t actually benefit U.S. forces in the RAND war game. The F-22s and F-35s quickly ran out of missiles and fuel, and surviving Chinese fighters penetrated U.S. aerial defenses and shot down tankers, radar early-warning planes and maritime patrol planes, effectively disabling the American force by depriving it of sensor coverage and range-extending aerial refueling.

Apparently startled by the findings, the Pentagon has moved to improve the magazine depth of its stealth fighters. Lockheed Martin is reportedly developing a smaller air-to-air missile that F-22s and F-35s could carry in greater numbers.

In 2011, RAND published a paper encouraging the Pentagon to consider adding 20 large air-to-air missiles to B-1 bombers. Four years later, John Stillion, a former RAND analyst and contributor to the 2008 war game and the 2011 paper, wrote a paper for the Center for Strategic and Budgetary Assessments, a Washington, D.C., think tank, proposing that the Pentagon’s next fighter should be the size of a bomber and carry 24 air-to-air missiles while also controlling drones hauling their own missiles.

RAND’s paper and Stillion’s proposal were hints that the arsenal-plane concept was gaining legitimacy in military circles. But the first arsenal plane could be a fighter rather than a bomber. In 2015 Boeing unveiled a new configuration for existing F-15C fighters that doubles the F-15’s standard air-to-air loadout from eight missiles to 16.

The Air Force is reportedly interested in adopting the Boeing upgrade, and in the meantime has also developed a new datalink pod for the F-15 that allows the older fighter to receive targeting data from the F-22. In theory, non-stealthy F-15s could fly behind F-22s and F-35s during an air battle, firing missiles at targets that the stealth fighters detect while evading detection themselves.

Carter’s arsenal-plane concept is consistent with years of study and technology-development pointing toward a two-tier air-combat force for the near future, one in which stealth fighters act as forward sensors, designating targets for non-stealthy aircraft—F-15s and bombers—carrying much larger payloads.

Perhaps not coincidentally, both the B-52 and B-1 fleets are undergoing extensive upgrades that include new datalinks.

To be clear, neither Carter nor Aviation Week‘s source specified whether the arsenal plane would carry air-to-air missiles. It’s possible the Pentagon is mostly interested in adding air-to-ground munitions to its stealth strike force.

But technologically speaking, there’s no reason why the arsenal plane couldn’t add aerial firepower to America’s stealth fighter fleet. Right now the arsenal plane is just a concept, rather than a formal program with a budget line. But the need is obvious and the hardware already exists. With funding and official approval, in a few years the F-22 and F-35 could fly into an air-to-air battle with heavily-armed bombers backing them up.