The U.S. Air Force’s Next Killer Drone Is Disposable 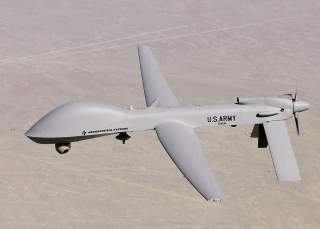 The U.S. Defense Department revealed the first LCAA prototype as part of the annual DoD Lab Day, an official even highlighting the work of various military research institutions. A photo accompanying a Lab Day handout depicts an angular, jet-powered drone with a silvery paint job that could have radar-absorbing qualities.

The Air Force wants the LCAA to have a Mach .9 top speed and a 1,500-mile mission-radius with a 500-pound payload in an internal bay.

The LCAA prototype, built by San Diego Kratos under a $41-million contract that the Air Force awarded in July 2016, bears a striking resemblance to Kratos’ XQ-222 drone concept.

Kratos pitched the 29-foot-long XQ-222 as an “affordable alternative” to traditional manned aircraft for strike, air-to-air and electronic-attack missions. Notably, the XQ-222 can be launched via catapult, making it “runway-independent,” according to the company. The LCAA appears to share this catapult-launch capability.

The idea behind the LCAA is to build lots of inexpensive drones and send them into combat without worrying about losing them. Not coincidentally, Kratos made its reputation building expendable target drones.

“These [LCAA] UAVs deliver long-range responsive capability in near-peer environments where forward basing is difficult or prohibited,” the Pentagon stated in its Lab Day handout. “LCAA can fly into highly contested areas ahead of a manned craft. The manned aircraft will thus be supported by UAVs, thereby increasing the engagement abilities in contested areas.”

It’s unclear how autonomous the LCAA would be and who would control them. But it’s worth noting that the Air Force is working on new technologies for combining manned and unmanned aircraft in mixed formations, with the crew of the manned planes issuing commands to highly-autonomous robotic wingmen.

But to be “attritable,” the LCAA must be cheap. The Air Force’s contract with Kratos requires that the LCAA cost no more than $3 million apiece for 99 copies and $2 million or less for batches of 100 or more drones.

To drive down the cost, the Defense Department wants contractors to “use a product-line approach distinguished by continual aircraft design and capability refresh to incorporate emerging technologies in a timely and cost-effective manner.” In other words, the Air Force could slightly improve the LCAA design after each small production batch.

“LCAA can be manufactured at a high rate, reducing touch labor and ultimately reducing cost,” the Pentagon stated. The drones would be relatively flimsy. “LCAA are not built for longevity: acceptance criteria should become less complex, resulting in a quicker production-to-air timeline.”

“This approach has several benefits,” said Dan Ward, a retired Air Force lieutenant colonel and former project manager. “The main one is that it is easier to experiment — and learn! — when the device in question is cheap and expendable. We can more readily try new ideas — new technologies, new tactics, etc. — because our exposure to loss is low.”

The LCAA program is potentially revolutionary for the Air Force. Hundreds or even thousands of the new drones could augment dwindling numbers of expensive manned warplanes that take decades to develop and field.

But the LCAA is, at present, just an experiment. There’s no guarantee the wider Air Force will embrace the concept of a “throw-away” plane. “There is a long history of great prototypes and small programs started up at various labs,” P.W. Singer, a strategist at the Washington, D.C.-based New America Foundation. “Too few make it into a program of record, where they are deployed widely.”