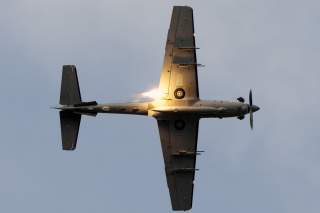 The service will be conducting an experiment this summer to determine if such an aircraft would be useful to perform missions over permissive airspace in place of much more expensive and capable fourth and fifth-generation fighters. The Air Force is expected to test four different aircraft types including Sierra Nevada’s A-29 Super Tucano, the Hawker Beechcraft AT-6, the Textron Scorpion Jet and the Air Tractor AT-802U during its experiment. The Senate—and particularly SASC chairman Sen. John McCain—wants to push the Air Force into buying a fleet of roughly 300 OA-X aircraft to help relieve the ever-increasing burden on the service’s tactical fighter fleet and to help season younger pilots.

“The idea behind funding this is actually to move this program along,” a Senate aide told reporters during a SASC background brief on June 29.

“The best way to do that is to provide the funding to get the program started.”

The OA-X is not technically an Air Force program of record yet, but the idea behind the SASC funding line is to push the service into transforming it into a formal acquisitions program. The Air Force had intended to use its experiment this summer to gauge the utility of an OA-X aircraft for combat missions over permissive environments during low intensity conflicts before building a business case to buy such a plane. The SASC language would bypass that process and appropriate $1.2 billion to buy 300 OA-X aircraft by 2022. Those aircraft would be an addition to the Air Force fleet—bolstering the number of frontline squadrons—rather than a replacement for any other type.

Earlier in the week, I spoke to Taco Gilbert, Sierra Nevada’s senior vice president for intelligence, surveillance and reconnaissance (ISR), the prime contractor for the A-29 Super Tucano in the United States. Gilbert noted that the Air Force has been through several iterations of the OA-X over the past 15 or so years. Each time, be it the Light Air Support (LAS) or Light Attack/Armed Reconnaissance (LAAR) or some other program designation, the effort to field a light combat aircraft suitable for the low-end counterinsurgency (COIN) fight has failed to come to fruition—largely due to institutional biases within the Air Force.

But over the course of the years, the Air Force seems to have come to the recognition that the low-intensity counterinsurgency fight is not going away. In previous years, the 2009 iteration of the OA-X program had died a slow death as the Air Force moved to posture itself for an era where it would return to fighting conventional state-on-state conflicts. This time around, things might be different.

“The Air Force is serious enough to conduct a public experiment, and for that, I applaud them,” Gilbert said.

“They realize the normal acquisition processes are lengthy, so they are trying something different.”

Overall, there seems to be broad recognition that using a Lockheed Martin F-22 Raptor stealth fighter or a F-35 Joint Strike Fighter to hit a $15,000 pickup truck filled with insurgents in the desert with a $35,000 Joint Direct Attack Munition is a foolish idea.

“Everyone realizes there is a need for a very economical fighter aircraft that has a multi-mission capability, that can fly in permissive environments and take the load off of the tired fourth-generation fighters, the new fifth-generation fighters, and not use up their service life in missions that don’t require all that capability,” Gilbert, a former Air Force F-111 Aardvark aviator, said.

“Further, there is the fighter pilot shortage, which requires not only cockpits to train fighter pilots, but cockpits to season them. And seasoning in fourth and fifth generation aircraft is phenomenally more expensive than in an OA-X.”

In terms of seasoning fighter pilots, something like an A-29 or AT-6 has all of the capabilities to instill the skills and fighter pilot mindset into young aviators at a fraction of the cost. The aircraft have cockpit displays, targeting pods and weapons that are similar to more sophisticated machines like the Lockheed Martin F-16C Fighting Falcon, but are slower and more forgiving—affording a young pilot a chance to learn.

“The A-29 can do all of the missions that they are looking for for that seasoning,” Gilbert said.

“Does it a little slower, maybe a little bit lower than an [Lockheed Martin] F-22, but it allows fledgling fighter pilots to hone their skills in mission planning and operational employment so that when they get into the expensive fighters, they are more capable.”

Moreover, an OA-X aircraft similar in concept to the A-29 or AT-6 has all of the capabilities needed to perform combat missions over permissive airspace against a low-end threat without incurring the cost of operating something like a Boeing F-15E Strike Eagle or Lockheed Martin F-35 Joint Strike Fighter. During its experiment, the Air Force will test the prospective OA-X aircraft in missions such as convoy escort, close air support, non-traditional ISR and other functions. The Air Force will also test the aircraft when they are operating from unimproved airfields near the front lines.

“They want to figure out what they can use this aircraft for and how versatile it will be,” Gilbert said.

Sierra Nevada is confident that its A-29 aircraft—which is built in Florida in conjunction with Brazilian airframer Embraer—will perform well in the OA-X experiment. The aircraft is serving with 13 air forces around the world, including in combat in Colombia and Afghanistan. The A-29 has amassed over 300,000 operational flight hours and almost 40,000 combat hours as a result of its wide usage around the globe.

“That’s combat ranging from the jungles of Latin America to the deserts and hot, high altitudes of Afghanistan,” Gilbert said.

The Air Force experiment is moving forward quickly. Sierra Nevada expects to start training service pilots on how to fly the A-29 starting on July 7 at Holloman Air Force Base in New Mexico. In contrast to previous light attack aircraft efforts, the Air Force will have its own pilots fly test missions over the near 3200 square mile White Sands Missile Range that stretches across New Mexico from the Texas border.

Each of the would-be contractors are providing company-owned assets for the OA-X experiment, Gilbert said. For the contractors, the OA-X could be a lucrative prize if the Air Force decides to buy an operational aircraft in numbers. With the Air Force’s seal of approval, the winning contractor would be able to sell their aircraft to numerous partner nation air services that either cannot afford--or even necessarily need--something like an F-35 or F-16, as a Senate aide noted. The market could potentially be worth billions of dollars for hundreds of aircraft.

At the end of the day, it is probably a wise choice for the Senate to push the Air Force into moving forward with a formal OA-X program by adding funding in the fiscal year 2018 budget.

“There is no reason to send an F-35 into Afghanistan when the Afghans today are proving an A-29 can do it and do it effectively at a fraction of the cost,” Gilbert said.

Only time will tell if the Air Force will actually buy an operational fleet of OA-X aircraft this time around. Institutional biases are difficult to overcome at the best of times.