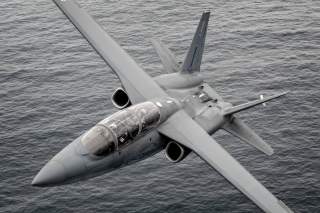 Textron is hoping that the United States Air Force will consider its Scorpion Jet private venture for its future light attack aircraft program called OA-X. The Air Force has not yet decided to formally proceed with an OA-X acquisition, but Textron hopes to participate in the service’s demonstration program this summer—sometime in August or September.

“Moving to Scorpion, our second production aircraft had a successful first flight earlier this week and will enter the flight test program,” Textron chief executive office Scott Donnelly told investors during the company’s first quarter earnings call on April 19. “In March, the U.S. Air Force formally authorized our OA-X light attack aircraft experimentation program, for which we have offered to demonstrate the capabilities of both the Scorpion and the AT-6 later this summer.”

The OA-X is not an Air Force acquisitions program—right now it is just an experiment. “The experimentation program is a stand-alone program,” Donnelly said. “So this is basically Air Force saying, we want to see what’s out there that would support that category of mission. So they have articulated what their expectations are, what kinds of things they would like to see demonstrated. They issued that. Companies were invited to send in proposals on what they would be able to demonstrate if they were invited to do that. We have done that for both Scorpion and AT-6.”

Only after the OA-X experiment is complete will the Air Force decide if it will proceed with an actual purchase of a light attack plane. “The Air Force has been saying publicly is that they will use that experimentation program to help inform them as to what’s out there and available and use that as a basis to decide whether they’re going to put together a program of record on a go-forward basis,” Donnelly said.

The OA-X might be the company’s only hope of selling the privately developed Scorpion light combat jet—despite its insistence that foreign customers are interested in the aircraft. “We continue those conversations with those customers,” Donnelly said. “We are at the phase right now, frankly, with one of the more important ones who’s already scheduling when they’re coming over to fly the aircraft.”

However, export customers are often reticent to buy aircraft that the domestic customer is unwilling to purchase for its own use. With the U.S. Air Force’s official stamp of approval and a purchase of some number of Scorpions for its own use, the jet’s chances on the international combat aircraft market would be greatly improved.

“The foreign customers are also very interested in this U.S. Air Force program because they like to see what the U.S. Air Force is doing,” Donnelly said. “So I think that is a – I don’t know if that helps or hurts, but certainly something that they’re watching as well. But anyway, I would say, the international conversations continue.”

However, even if the Air Force decides to formally proceed with an OA-X acquisition program—which is not a sure bet given the service’s track record of abortive attempts to buy a light attack aircraft—the Scorpion faces stiff competition. Ironically, one of its strongest rivals would be its own corporate stable-mate—the Beechcraft AT-6.

“The experimentation in terms of the way it was expressed by the Air Force, in terms of the requirements or what they want to see demonstrated was, I think, intentionally broad enough to pick up a pretty broad swath of capability that would involve everything from aircraft class of the AT-6 in the sort of the single-engine turboprop class of aircraft up to and including twin jet kind of aircraft like a Scorpion-type aircraft,” Donnelly said. “Where ultimately they want to go from a requirement standpoint, then – if they go at all, is I think to be informed by that.”

Meanwhile, Textron continues to pour its own money into the Scorpion to complete the development of the jet’s mission systems. “We’ve got two of the aircraft are flying. We have the third one that’s in its sort of final assembly,” Donnelly said. “There’s a fair bit of work going on right now on the mission systems, which is very specific to what we know the Air Force is going to want to see demonstrated in their experimentation program. And obviously, all that culminated in having these aircraft ready to go do that program by the beginning of August.”

Time will tell if Textron will manage to convince the Air Force to buy the Scorpion—or if the company is throwing good money down the drain.