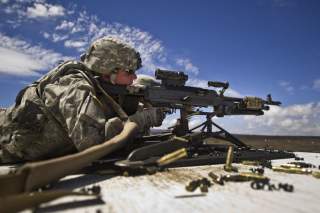 Hand grenades are an ancient weapon but hardly irrelevant. There are few devices as brutally effective at killing inside enclosed spaces, such as caves or rooms, than a device such as the U.S. Army’s M67 fragmentation grenade.

The M67 has been around for awhile, being first introduced into service in 1968. And mechanically, it’s little different from the grenades American soldiers lobbed into bunkers during the World Wars. It’s a relic, one still quite practical and useful, that has survived like the M2 Browning machine gun into the 21st century.

But the Army’s Picatinny Arsenal is working on a replacement, which if introduced into service, will amount to the first new lethal American grenade since Vietnam. And there’s an interesting design choice behind it.

The Enhanced Tactical Multi-Purpose grenade, or ET-MP, will be able to switch between two modes and produce two different kinds of explosions, according to Picatinny. At the same time, it brings back an older “concussive” effect absent from the U.S. Army since the 1970s.

Adjust the grenade, and the operator can select a fragmentation or concussion mode.

The ET-MP is also safer for the thrower, Picatinny Arsenal added in an announcement this week. This is because the grenade will feature an electronic fuze, or delay mechanism, unlike the M67’s mechanical fuze. To simplify, an electronic fuze is more reliable over the long term and the detonation can be timed to be extremely precise.

However, the grenade appears to be just a design at this stage, with the Pentagon committing $1.1 million in funding for the 2017 fiscal year — tiny on the scale of other military programs.

Currently, the Army possesses the spherical, nearly-baseball-sized M67 as its primary hand grenade. Soldiers often carry other types of less-lethal grenades which can create disorienting noise and flashes, illumination, or intense heat for destroying equipment.

The Army formerly fielded concussion grenades known as MK3A2s, which began as bunker-clearing weapons during World War I. Shaped like a beer can, these kill or incapacitate enemy troops when detonated inside confined spaces as the blast pressure reverberates off the walls.

Soldiers frequently lobbed them on the battlefield, so much so that concussion grenades amounted to the second most common type tossed by U.S. soldiers during the Vietnam War, according to a 1969 Army study of 17 infantry fighting in the conflict. Fragmentation grenades, which kill by blasting out small metal fragments, were the most popular.

But the MK3A2 was a danger to U.S. troops. The grenade’s exterior coating contained up to 50 percent asbestos, which can spread microscopic fibers that pose serious health dangers if inhaled. You definitely wouldn’t want to breath deeply while clearing a room after detonating one inside.

The Army withdrew the MK3A2 from service in 1975, according to Picatinny. Frags and stun grenades, such as the current M84 flashbang, took its place.

But in a few years, soldiers could have them again in a two-for-one. As concussion grenades have a smaller lethal blast radius than fragmentation grenades, it’d give troops more flexibility when clearing obstacles.

There’s one more improvement with the ET-MP — it’s ambidextrous.

That’s important because the current M67 was designed for right-handed soldiers, so the Army trains left-handed troops to flip the grenade upside down, holding the safety lever down with the left thumb, while pulling out the ring with the opposite hand.

But that can be awkward for lefties to handle. When dealing with a weapon where a single fumble can kill the thrower and the people around them,awkward is a word you don’t want to hear.