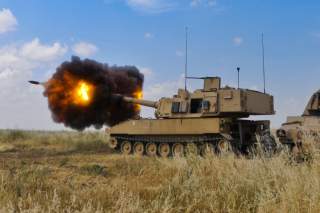 Overall, the Pentagon is accelerating developmental testing of its high-tech, long-range Electro-Magnetic Rail Gun by expanding the platforms from which it might fire and potentially postponing an upcoming at-sea demonstration of the weapon, Pentagon and Navy officials told Scout Warrior.

While initially conceived of and developed for the Navy's emerging Rail Gun Weapon, the Pentagon and Army are now firing the Hyper Velocity Projectile from an Army Howitzer in order to potential harness near-term weapons ability, increase the scope, lethality and range ability to accelerate combat deployment of the lethal, high-speed round.

Firing from an Army Howitzer, the rail gun hypervelocity projectile can fire a 5,000-mile and hour projectile at enemy targets to include buildings, force concentrations, weapons systems, drones, aircraft,vehicle bunkers and even incoming enemy missiles and artillery rounds.

"We can defend against an incoming salvo with a bullet. That is very much a focus getting ready for the future," Dr. William Roper, Director of the Pentagon's once-secret Strategic Capabilities Office, told Scout Warrior among a small group of reporters.

Pentagon weapons developers with the Strategic Capabilities Office, or SCO, are wokring to further accelerate development of both the gun launcher and the hypervelocity projectile it fires. While plans for the weapon’s development are still being deliberated, ongoing work is developing integration and firing of the projectile onto existing Navy’s deck-mounted 5-inch guns or Army M109 Paladin self-propelled howitzer (a mobile platform which fires 155mm artillery rounds).

The Strategic Capabilities Office, a high-level Pentagon effort, is aimed at exploring emerging technologies with a mind to how they can be integrated quickly into existing weapons systems and platforms. Part of the rationale is to harness promising systems, weapons and technologies able to arrive in combat sooner that would be the case should they go through the normal bureaucratic acquisition process. In almost every instance, the SCO partners with one of the services to blend new weapons with current systems for the near term, Roper explained.

Part of the calculus is grounded in the notion of integrating discovery and prototyping, being able to adjust and fix in process without committing to an official requirement, Roper said.

Roper further explained that firing the HVP out of a 155m Howitzer brings certain advantages, because the weapon's muzzle breach at the end of its cannon is able to catch some of the round's propellant - making the firing safer for Soldiers.
"Its design traits were all based with dealing with extreme electromagnetic fields - that projectile could be fired out of an existing weapon system. Its whole role is to just keep the hot gas and propellant from rushing past. You dont want it eroded by the hot material," Roper explained.
The goal of the effort is to fire a "sub-caliber" round that is aerodynamic and able to fly at hypersonic speeds. We can significanly increase the range and continually improve what powder guns can do, he added.
"We've been looking at the data and are very pleased with the results we are getting back," Roper said.
One Senior Army official told Scout Warrior that firing a Hyper Velocity Projectile from a Howitzer builds upon rapid progress with targeting technology, fire-control systems and faster computer processing speeds for fire direction.
Such an ability would give ground-based mobile artillery weapons an ability to protect Soldiers from greater distances by identifying and destroying attacks much more quickly than existing Howitzer rounds can, the Senior official said.
"If you can destroy approaching enemy fire in a matter of seconds, it changes the calculus of fire support. You have really changed things," he told Scout Warrior.
Adjusting for the higher-speed round also invovles managing blast overpressure released from the muzzle when the projectile leaves the cannon; the trajectory or guidance of the round also needs to be properly managed as it exits the cannon tube through the muzzle toward the intended.
"This is not just making sure you are not damaging the tube, but retaining accuracy for the projectile based on projectile stability," he said.
Accomplishing this high-tech integration also widens the target envelope a Howitzer is able to destroy, expanding its offensive attack, ground defense and counter-air possibilities.
The senior official described the Army Howitzer as an "advanced countermeasure," therefore underscoring the added combat value of firing a round with massively increased speed and lethality.
Meanwhile, the Navy intends to arm portions of its surface fleet with Rail Gun fire power; platforms include Joint High-Speed Vessels, Destroyers and Cruisers, among others.
On the ocean, a HPV be fired against a floating target, in an effort to test the rail gun’s ability to destroy targets that are beyond-the-horizon much faster than existing long-range weapons, Navy officials said.