The U.S. Army Is Getting Ready for a Jungle War 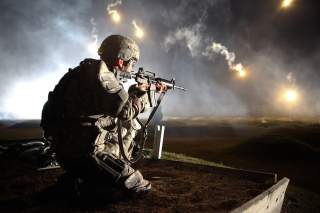 Emerging waterways, lush terrain and tangled bushing make it more difficult for Soldiers to track, find and destroy hidden enemies in the jungle - a scenario which is inspiring a current Army effort to send a newly configured “jungle boot” to war.

Soldier field testing with the boot is expected to take place in the next few months, as a key step toward ultimately developing and deploying a new boot.

The idea with the boot is to design gear able to maximize combat effectiveness in a jungle environment - and create something that does not puncture easily or hold water.

“The current boots are not designed for the jungle environment. They do not have puncture protection and a lot of them are designed with cushion to add comfort which is just a sponge for water and dirt in the jungle. These boots are designed not to hold moisture and they offer great traction in the mud,” said Col. Stephen Thomas, project manager with Soldier Protection and Individual Equipment, PEO Soldier.

Marine Corps, he did say the two services were working together by sharing data and test results from various boot assessments.

“Our soldiers like a boot taller than six or eight inches tall. The overall picture is for us to have a common boot. We have shared evaluations in the past,” Thomas said.

Development of the new boot is, by designed, aligned with emerging Army training and combat requirements now oriented toward

an increasing wide swath of threats.

Accordingly, preparing for jungle warfare is, without question, a major training emphasis for the Army as it seeks to prepare

for the widest possible range of combat contingencies in the future.

After more than a decade and a half of fighting in the Iraqi desert and mountains of Afghanistan, the Army is stepping up its training in “jungle warfare” conditions as part of a broader effort to anticipate emerging terrorist and state threats against whom the Army could be called upon to operate.

​Jungle training, some of which has taken place in Africa in recent years with the 82nd Airborne Division, has included exploration of “mock-combat” circumstances wherein troops had to repel ambushes, attack enemy locations and conduct surveillance and reconnaissance missions in circumstances with reduced visibility.

and thick underbrush – are all activities performed by soldiers in an Army “jungle warfare” school in recent years.

US Army paratroopers with the 82nd Airborne Division and Soldiers with the 3rd Infantry Division were attacking enemies, conducting ambushes and “moving to contact” in the thick jungles of Africa as a way to better prepare for potential future

Within the last several years, some combat exercises took place at a French Jungle Warfare School in Libreville, Gabon, a country in central Africa.

Soldiers participating in the jungle warfare school ran through an obstacle courses, confronted various booby traps and practiced specific tactics needed to fight in a jungle environment. These include stalking enemies in camouflage, sniper operations and using trees and brush to launch surprise attacks.

While some infrared sensors might still be able to detect "heat" signatures through jungle leaves, trees and underbrush, electro-optical sensors and other kinds of visually-oriented technologies will operate quite differently in the jungle.

As the Army pivots beyond Iraq and Afghanistan, Africa is increasingly becoming an area for training and collaboration with allies.