The U.S. Army Has Big Plans If a War with Russia or China Ever Went Down 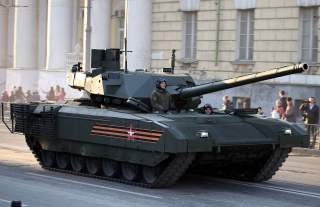 The Army is now crafting new combat “operations” doctrine designed to better position the service for the prospect of large-scale, mechanized, force-on-force warfare against technologically advanced near-peer rivals – such as Russia or China - able to substantially challenge US military technological superiority.

Rigorous examination is now underway among Army leaders and service doctrine developers in preparation for a new or evolved concept, called “FM 3.0 Operations,” slated to emerge this coming October.

It is intended as a supplement or adjustment to the Army’s current “FM 3.0 Full Spectrum” Field Manual, Rickey Smith, Deputy Chief of Staff, US Army Training and Doctrine Command, told Scout Warrior in an interview.

“We are working on the next iteration of a field manual for operations, which looks at where we are and where we are going. You cannot view the current force as the only answer. Things are evolving and you do not want to wait for some perfect end state,” Smith said.

While the emerging “operations” doctrine adaptation does recognize that insurgent and terrorist threats from groups of state and non-state actors will likely persist for decades into the future, the new manual will focus intently upon preparedness for a fast-developing high-tech combat environment against a major adversary.

For instance, Russia and China both claim to be developing stealth 5th generation fighters, electronic warfare and more evolved air defenses able to target aircraft on a wider range of frequencies at much farther distances. Long-range, precision guided anti-ship missiles able to target US carriers at ranges up to 900 miles present threat scenarios making it much harder for US platforms to operate in certain areas and sufficiently project power.

When it comes to land combat, the renewed doctrine will accommodate the current recognition that the US Army is no longer the only force to possess land-based, long-range precision weaponry. While JDAMs and GPS-guided weapons fired from the air have existed since the Gulf War timeframe, land-based precision munitions such as the 155m GPS-guided Excalibur artillery round able to hit 30 kilometers. This weapon first entered service in 2007, however precision-guided land artillery is now something many potential adversaries now possess as well. In addition, the Army's Guided Multiple Launch Rocket System (GMLRS) is a GPS-guided rocket able to destroy enemies at ranges up to 70 kilometers; the kind of long-range land-fired precision evidenced by GMLRS is yet another instance of US weapons technology emerging in recent years that is now rivaled by similar weapons made my large nation-state potential adversaries.

Drones, such as the Army's Shadow or Gray Eagle aircraft are also the kind of ISR platforms now similar to many technologies currently on the global marketplace.

All of these advancing and increasingly accessible weapons, quite naturally, foster a need for the US to renew its doctrine such that it can effectively respond to a need for new tactics, concepts, strategies and combat approaches designed for a new operational environment.

The Army’s current doctrine, Field Manual 3.0, emphasizes what the service calls “full-spectrum” operations to include state and non-state threats. The manual addresses the importance of a “whole-of-government” approach aimed at counterinsurgency, combined-arms, stability operations as well as anticipated future developments.

The existing FM 3.0 doctrine is, among other things, substantially grounded upon the need for the Army to be prepared for non-linear, asymmetrical warfare fighting groups of insurgents often deliberately blended in with civilian populations.

Full-spectrum is meant to connote that Army operations will also include psychological operations, humanitarian missions, asymmetrical warfare, train-and-equip priorities as well as continued collaboration with allies and preparations for the full-range of combat possibilities.

With a decrease in combat operations in Iraq and Afghanistan in recent years, the Army has been adapting its training focus to incorporate a broader spectrum of mechanized warfare, force-on-force threats following 15 years of counterinsurgency. This is something the new doctrine is expected to reinforce

“We’ve always had knowledge of the need for full-spectrum capability, including both near-peer operations and counterinsurgency, but the Army is a learning organization that continues. We are concept based and doctrine driven. Counterinsurgency is not going away and will always be a constant.  However, we must improve our knowledge about dealing with peer nation state threats” Smith explained.

While the existing FM 3.0 Full Spectrum does incorporate a need to address modern threats such as “hybrid warfare,” much of the focus stops short of recognizing the full extent to which other rival militaries are developing platforms and technologies comparable or superior to some US weapons systems.

Enemies such as ISIS and state-sponsored terrorist groups such as Hamas and Hezbollah are equipped to fight with a blend of terrorist tactics and advanced weaponry such as sophisticated sensors, surveillance networks, and some precision munitions such as anti-tank guided missiles. This blended threat, requiring a mixture of both combined arms and counterinsurgency tactics, is the kind of scenario the Army has been preparing to confront.

The new manual will also fully incorporate a fast-evolving Pentagon strategy referred to as “multi-domain” warfare; this is based upon the recognition that  enemy tactics and emerging technologies increasingly engender a greater need for inter-service, multi-domain operations.

During his April 27, 17 testimony to Congress, the Pacific Combatant Command Commander said “Our near-peer competitors continue to modernize their weapons systems and leverage new technologies to close capability gaps between us and them. We must maintain our capability to operate in contested environments. Additionally, we must continue to expand cross domain fires capabilities and focus on joint integration to strengthen deterrence and enable joint combined maneuver.”

Admiral Harris’s observations highlight why the Army is preparing for maritime warfare scenarios such as the value of using land-based rockets to attack and destroy enemy ships.

Admiral Harris addressed these concerns in testimony.  “Just as our adversaries have adapted to counter our asymmetric advantages, we, too must adapt the way we fight to leverage new technologies and approaches to operations to maintain our edge. We need systems that are fast, long-range, lethal, survivable, networked, rapidly deployable, and maneuverable. Given existing technology, such systems should be relatively inexpensive.  With this in mind that I have become a strong advocate for the operational concept known as Multi-Domain Battle.”

This focus includes accommodating the need to address fast-changing threats in the cyber, electronic warfare, precision weaponry, space, drones and C4ISR domains. Rapid developments in these areas underscores the importance of cross-domain connectivity and warfare, such as an ability of a sea-based F-18 to cue land-based artillery from tactically difficult distances.

Another example of multi-domain warfare includes the Army’s ongoing effort to test and prepare for maritime warfare scenarios such as the value of using land-based rockets to attack and destroy enemy ships.

“The joint force can no longer assume continuous superiority in any domain now that potential adversaries have expanded,” Smith explained.

This concept is especially important given that potential adversaries are becoming more adept at being able to disrupt or de-synchronize US military joint operations, Smith added.

“Desert Storm showed the world Air-Land battle. We unleased something they had envisioned or heard about. They have studied our military,” Smith said.