The U.S. Army Has Big Plans for Its Next Big Weapon of War: A Super Tank 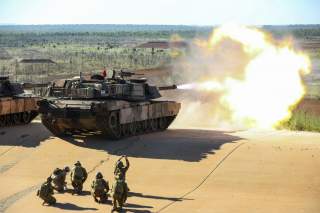 “The vehicle needs to have physical adaptability and change and growth ability for alterations as one of its premises - so it can learn things about energy and power and armor. The Army really needs to think about growth as an operational need,” a senior Army official told Scout Warrior in an interview.

The Army is now performing concept modeling and early design work for a new mobile, lethal, high-tech future lightweight tank platform able to detect and destroy a wider range of targets from farther distances, cross bridges, incinerate drones with lasers and destroy incoming enemy artillery fire –  all for the 2030s and beyond.

The new vehicle, now emerging purely in the concept phase, is based upon the reality that the current M1A2 SEP Abrams main battle tank can only be upgraded to a certain limited extent, senior Army officials explained.

The extensive conceptual work, simulation and design modeling will be needed before there is any opportunity to “bend metal” and produce a new tank.

The new tank will emerge after the Army first fields its M1A2 SEP v4 upgraded Abrams tank in the 2020s, a more lethal Abrams variant with 3rd Generation Forward Looking Infrared Sensors for greater targeting range and resolution and more lethal Advanced Multi-Purpose, or AMP ammunition combining many rounds into a single 120mm round.

However, although Army developers often maintain that while the latest, upgraded high-tech v4 Abrams is much more advanced than the first Abrams tanks produced decades ago, there are limits to how much the existing Abrams platform can be upgraded.

Although initial requirements for the future tank have yet to emerge, Bassett explained that the next-generation platform will use advanced sensors and light-weight composite armor materials able to achieve equal or greater protection at much lighter weight

Developers plan to build in side and underbody protection from the ground up for the new platform.

Army developers said certain immediate changes and manufacturing techniques could easily save at least 20-percent of the weight of a current 72-ton Abrams.

The idea is to engineer a tank that is not only much more advanced than the Abrams in terms of sensors, networking technology, force tracking systems, an ability to control nearby drones and vastly increased fire-power – but to build a vehicle with open-architecture such that it can quickly accommodate new technologies as they emerge.

The Abrams was first fielded with a 105mm cannon – yet built with a mind to potential future upgrades such that it could be configured to fire a 120mm gun.

“The vehicle needs to have physical adaptability and change and growth ability for alterations as one of its premises - so it can learn things about energy and power and armor. The Army really needs to think about growth as an operational need,” a senior Army official told Scout Warrior in an interview.

The official said that, for example, Humvees were not built for the growth necessary to respond to the fast-emerging and deadly threat of roadside bombs in Iraq.

The new tank will be specifically engineered with additional space for automotive systems, people and ammunition.  As computer algorithms rapidly advance to allow for greater levels of autonomy, the Abrams tank will be able to control nearby drones using its own on-board command and control networking, service developers said.

Bassett, and developers with General Dynamics Land Systems, specifically said that this kind of autonomy was already being worked on for current and future tanks.

Active protection systems are another instance of emerging technologies which will go on the latest state-of-the-art Abrams tanks and also quite likely be used for the new tank. Using computer algorithms, fire control technology, sensors and an interceptor of some kind, Active Protection Systems are engineered to detect, track and destroy incoming enemy fire in a matter of milliseconds. The Army is currently fast-tracking an effort to explore a number of different APS systems for the Abrams. General Dynamics Land Systems is, as part of the effort, using its own innovation to engineer an APS system which is not a “bolt-on” type of applique but something integrated more fully into the tank itself, company developers have told Scout Warrior.

The use of space in the new vehicle, drawing upon a better allocation of size-weight-and-electrical power will enable the new tank to accommodate better weapons, be more fuel efficient and provide greater protection to the crew.

Army leaders said that less volume in the power train can help engineer a new platform that has less transportability challenges.

While advanced Abrams tanks will be using a mobile Auxiliary Power Unit to bring more on-board electrical power to the platform for increased targeting, command-and-control technologies and weapons support, mobile power is needed to sustain future systems such as laser weapons.

The Army cancelled its plans for a future Ground Combat Vehicle, largely for budget reasons, some of the innovations, technologies and weapons systems are informing this effort to engineer a new tank for the future.

The XM813, according to Army developmental papers, is able to fire both armor-piercing rounds and air-burst rounds which detonate in the air in proximity to an enemy in defilade, hiding behind a rock or tree, for example.

The computer-controlled and electronically driven weapon can fire up to 200 rounds per minute, uses a dual-recoil firing system and a semi-closed bolt firing mode, Army information says.

The new tank may quite likely use a futuristic, lightweight 120mm cannon first developed years ago for the Army’s now-cancelled Future Combat Systems, or FCS; FCS worked on a series of “leap-ahead” technologies which, in many instances, continue to inform current Army modernization efforts.

The MGVs included a Non-Line-of-Sight artillery variant, Reconnaissance and Surveillance, Infantry, Medical and Command-and-Control variants, among others. One of the key vehicles in this planned future fleet was the Mounted Combat System, or MCS.

The overall MGV effort was cancelled by former Defense Secretary Robert Gates in 2009 because Gates felt that the 27-ton common chassis was not sufficiently survivable enough in a modern IED-filled threat environment.

Although the MGVs were engineered with a so-called “survivability onion” of networked sensors and active protection systems to identify and destroy approaching enemy fire at great distances, many critics of FCS felt that the vehicles were not sufficient to withstand a wide range of enemy attacks should incoming fire penetrate sensors or hit targets in the event that the sensor malfunctioned or were jammed.

The Army’s MCS program developed and test-fired a super lightweight 120mm cannon, called the XM360, able to fire existing and emerging next-generation tank rounds. The lightweight weapon being developed for the MCS was two-tons, roughly one-half the weight of the existing Abrams 120mm cannon.

The MCS was to have had a crew of two, a .50 caliber machine gun, and a 40mm automatic grenade launcher.

In fact, the Army’s recent Combat Vehicle Modernization Strategy specifically mentions the value of adapting the XM360 for future use.

"Next-Generation Large Caliber Cannon Technology. The XM360 next-generation 120mm tank cannon integrated with the AAHS will provide the M1 Abrams a capability to fire the next generation of high-energy and smart-tank ammunition at beyond line-of-sight (LOS) ranges. The XM360 could also incorporate remote control operation technologies to allow its integration on autonomous vehicles and vehicles with reduced crew size. For lighter weight vehicles, recoil limitations are overcome by incorporating the larger caliber rarefaction wave gun technology while providing guided, stabilized LOS, course-corrected LOS, and beyond LOS accuracy"