The U.S. Army Has a Deadly New Sniper Rifle 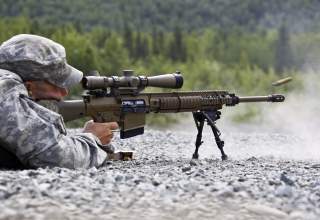 Despite a brief period of ambiguity wrought by budget-jousting among lawmakers in Congress, the Army’s new and improved sniper rifle is alive and well.

Heckler & Koch showed off its M110A1 7.62mm semi-automatic sniper rifle, selected for the Army’s Compact Semi-Automatic Sniper System (CSASS) program on the floor of the Association of the U.S. Army’s annual conference and exposition in Washington this week, a first up-close-and-personal look at the lightweight rifle.

The M1101A1 HK CSASS is a lightweight version of H&K’s G28E sniper rifle, one of which was also on display at the company’s AUSA spread. The company got to work after Army Contracting Command awarded the gun manufacturer a $44.5 million contract in 2016 for a version with a baffle-less OSS suppressor.

How China Could Crush the U.S. Air Force in a Dog Fight

With a 16 inch long barrel and weighing 8.7 pounds with an empty magazine, the HK certainly meets the Army’s CSASS requirements size and weight requirements. It boasts a Schmidt & Bender 3-20X50 PMII Ultra Short Scope for improved optics and accuracy.

And with a similar look and feel to the standard M4 and M16 assault rifles, the M1101 will also be familiar to infantry soldiers who may end up wielding it downrange: In September, the branch announced plans to field a modified version specifically for regular infantrymen serving in a designated marksman role.

The Army contract for the HK CSASS came with a maximum order of 3,643 rifles, although it’s still unclear if Congress’ ongoing budget tribulations will affect future acquisition. And although there’s no word on when the lethal new rifle will end up in soldiers’ hands, the promise of a souped-up 7.62mm sniper rifle for a squad-level marksman is still worth looking forward to.