The U.S. Army Has A New Weapon to Fight the Next Big Land War (Think Russia or China) 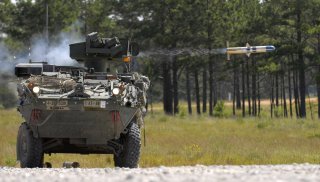 The Army is firing off its new Stryker-mounted 30mm cannon to qualify the weapon, assess new airburst ammunition and prepare the infantry carrier for a wide range of anticipated high-intensity future combat contingencies.

Several prototypes of the emerging 30mm armed Stryker Infantry Carrier Vehicle, called the Dragoon, have been received by Army developers as part of a long-term “Stryker Lethality” program.

The new weapons are designed to support infantry units on the move in major combat, assist ground formations in armored warfare, identify and destroy ground and air threats from greater stand-off ranges and better enable the Army to succeed, if necessary, against near-peer adversaries in a massive, mechanized major power warfare scenario.

“Not only does this provide improved firepower, it also enhances vehicle survivability by providing stand-off against potential threat weapons,” Givens said.

Gunnery training and user evaluations designed to familiarize Army soldiers with the emerging weapons platform is a large part of ongoing preparation for the eventual deployment of the 30mm Stryker, slated to deploy to Europe with the Army’s 2nd Cavalry Unit early next year.

Weapons developers with Stryker-maker General Dynamics Land Systems have been working closely with Army soldiers on these training and preparation activities, working to solicit soldier feedback and make adjustments as needed.

“The 30mm does not change the mission of moving a nine-man squad from point to point amid dangerous combat circumstances. The 30mm upguns the vehicle to enhance mission possibilities without changing the core mission,” said Wendy Staiger, Stryker Program Director, GDLS, told Warrior.

“Near-peer threats from the air such as rockets, missiles and artillery are moving to the forefront. A small bullet may not take out a large weapon, but let’s knock smaller attacks out of the air with a 30mm round or laser weapon. Let’s have multiple countermeasures,” a senior Army official told Warrior in an interview. “Indirect fires is a big deal. You still have to maneuver and close with the enemy when you are facing adversaries with more capable fires in their quiver. You have to protect the force with your own fires.”

The senior Army weapons, doctrine and tactics developer explained these Stryker combat-upgrades in terms of a wide-ranging technology “mash up” including sensors, countermeasures, fire-control system and next-generation ammunition able to destroy a wider range of enemy targets.

One analyst who closely tracks emerging technologies, weapons programs and potential threats to the US military specified aerial attacks as a fast-growing area of great risk to Army ground forces.

“The intent of these upgrades is to provide sufficient fire support for infantry and scout Soldiers as they dismount in close proximity to the enemy or while mounted,” Givens said.

A new airburst round for the 30mm cannon, using a “proximity fuse,” is regarded by Army and industry developers alike as a substantial combat-enhancing innovation of great relevance to the Stryker lethality program.

By being able to detonate near or in the vicinity of enemy targets, and not needing to purely rely upon point-detonation or impact explosions, airburst ammunition massively widens the target envelope - enabling the weapon to fire through windows, attack enemy drones and hit aircraft without requiring an exact intercept. Airburst weapons can destroy enemies behind rocks or walls, the senior Army official said.

Airburst often relies upon laser rangefinder technology, a method of calculating the exact distance to a desired target area. The Army XM 25 airburst weapon, used effectively against Taliban fighters hiding behind walls in Afghanistan, relies upon laser rangefinder technology. Since the speed of light is a known entity, and the time of travel is also quantifiable, an algorithm is then able to precisely calculate the distance of an enemy target area – thus accurately targeting the round, according to Army scientists.

The last time the Army qualified a new ground, direct-fire weapons system was when the M256 cannon was integrated on the M1 Abrams tank in the 1980s, service officials said.

The entire Stryker lethality initiative is operating on a massively accelerated acquisition timeline in order to address fast-moving threats and circumvent or shorten certain acquisition procedures at times thought to encumber the development and deployment of new technologies.

Many specific milestones or procurement processes are often reserved for longer-term developmental weapons programs, whereas urgent needs or Operational Needs Statements are pursued intensely by industry and Army acquisition officials when pressing threat circumstances emerge.  Accordingly, the need for a more lethal Stryker was considered urgent.

Industry innovation is often a key ingredient informing this calculus as weapons and technology developers, in many instances, use internal research and development efforts to address emerging threats and engineer new technologies and applications.

“We are trying to anticipate the next set of needs and look at what additional enhancements we can offer,” Gordon Stein, Vice President of Stryker & Specialty Wheeled Vehicles, GDLS, told Warrior in an interview.

In July 2015, the Army approved a Directed Requirement to increase lethality for 81 Stryker vehicles for the 2nd Cavalry Regiment to provide Stryker Brigade Combat Teams with direct fire support to its mounted and dismounted infantry.

Army statements said the need became increasingly evident to the Army given increased aggression in that region against a backdrop of limited U.S. Armored Forces remaining in Europe.

Overall, the fast-moving threat environment in Europe, in light of Russia’s annexation of Crimea and activity in the Ukraine – was by no means lost on Pentagon and Army leaders. In fact, the stepped up Russian activity inspired a multi-billion dollar, large-scale NATO and US European Command “European Reassurance Initiative” designed to add funds and forces to Europe; the effort also included a sizeable uptick in combat mobility demonstrations and joint-training and interoperability exercises with key Eastern European US and NATO allies.

“We are not waiting for requirements but listening to soldiers and adapting quickly to come up with solutions,” Kendall Linson, Business Development Manager, GDLS, told Scout Warrior.