The U.S. Army Has No Money to Develop a New Tank 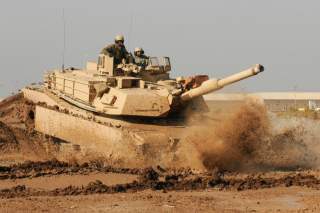 The U.S. Army would develop next-generation replacements for its armored vehicles such as the M1A2 Abrams main battle tank and the Bradley fighting vehicle, but the service simply does not have the money for such projects.

Instead, the Army is incrementally improving its venerable armored combat vehicles to keep them relevant against a rapidly modernizing threat—the Russian Armata family of combat vehicles for example. The Army does have some concepts that it is developing for next generation combat vehicles—and the service might build prototypes—but there are no plans to bring any such machines into production.

“I’d love to have replacement programs today for Abrams and Bradley and lay in plans to go do that,” Maj. Gen. David Bassett, the U.S. Army’s program executive officer for Ground Combat Systems told reporters the Association of the United States Army annual meeting in Washington on Oct. 4. “But it doesn’t fit in this portfolio in this budget environment.”

The Army knows the limitations of both the Abrams and the Bradley—and has a good idea where there are opportunities available for incremental modernization, Bassett said. There is room for growth, and Bassett pointed out that both vehicles have little in common with the original variants that first rolled off the production line in the early 1980s. Nonetheless, Bassett acknowledged there are limits to how many more upgrades can be made to the venerable armored vehicles. The question for the Army is which technologies can be integrated into the existing platforms and which technologies will require a completely new vehicle, Bassett said.

Indeed, sometimes the Army has found that making incremental upgrades to multiple vehicle types is better than developing a single replacement for one type of vehicle. Such was the case with the Army’s now-defunct Ground Combat Vehicle replacement for the Bradley—the service realized greater capability by scrapping that program and using the money to update its Abrams, Bradleys and Paladin self-propelled guns, Bassett said.

“At the end of the day, a combat vehicle is about a box and mobility system, lethality system and communications and other things,” Bassett said. “If you can take all those things and put them on an existing vehicle, then maybe you don’t have to have a whole new vehicle built from scratch and the risk associated with that kind of development.”

The Armored Multipurpose Fighting Vehicle (AMPV) program is an example where a “new” vehicle was developed by using components from an existing machine. The AMPV uses a new hull, but most of the vehicle’s innards are sourced from the Bradley, Bassett said. However, there are limits—for example the powertrain on a Bradley—there is room only for a certain-sized engine. “If we’re were in bring in a new improved powertrain, that just adds risk on top of that,” Bassett said. “So we’ve been doing this to build new capabilities in an incremental way over time. It’s also what our budget supports.”

But even incremental development and improvement will mean that both the M1A2 SEPv.3 and the Bradley will remain potent machines. For example, the Army is currently working on developing new features such the Modular Active Protection Systems (MAPS), which will help improve both machines’ defenses against incoming missiles. Whether the Army’s incremental approach will be sufficient to keep pace with Russian and Chinese developments is yet to be seen—but in the current budgetary environment, it’s the best the Army can do.