The U.S. Army Is Testing a Bigger (And Deadlier) Bullet 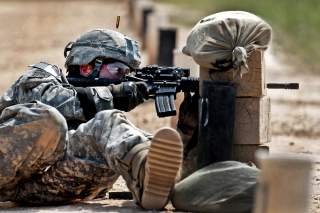 The round itself is not the biggest technical hurdle to be overcome, Donahue said. Both the automatic rifle that will replace the SAW and the new carbine will have increased chamber pressure and digital sights that “are probably a bigger deal” than the bullet that they will chamber.

For decades the U.S. military’s rifles and machine guns have chambered either 5.56mm or 7.62mm rounds. Now, the Army’s newest weapons are being tested to fire a new caliber bullet that’s faster and more accurate to give soldiers an edge over their adversaries.

The Army is not saying exactly what types of defenses that this new bullet is meant to penetrate, but last year Army Chief of Staff Gen. Mark Milley told lawmakers that some types of body armor can stop a 5.56mm round.

“We have to change because of the threats that we face on the battlefield – and I’m not going to go any deeper than that,” said Brig. Gen. Christopher Donahue, director of the Army’s soldier lethality cross functional team. “Our reason for change is based off of threat.”

The Army is currently testing a 6.8mm round for the M249 Squad Automatic Weapon and M4 carbine replacements, Donahue told Task & Purpose on Wednesday.

The prototype bullet being tested is significantly lighter than a 7.62mm round because the 6.8mm round’s casing is made out of lighter material, he said.

Another benefit is that it flies at a supersonic velocity for longer, so it is more accurate, retired Army Maj. Gen. Robert Scales told Task & Purpose.

“It’s the optimum compromise: It gives you extended range, controllable recoil, and deadly effect because of the velocity and the weight of the bullet,” said Scales, who is chairman of an advisory board to the Pentagon’s close combat lethality task force.

If the Army adopted a 6.8mm round, it would need to develop a new action for its carbines and SAW replacement, he said. Since the bullet’s casing would not be made out of metal, the Army would also have to control the heat to keep the casings from melting.

“These are problems that can be solved,” Scales said. “We’re not talking about ballistic missile defense here.”

The round itself is not the biggest technical hurdle to be overcome, Donahue said. Both the automatic rifle that will replace the SAW and the new carbine will have increased chamber pressure and digital sights that “are probably a bigger deal” than the bullet that they will chamber.

Both new weapons are meant for soldiers “who close with the enemy,” including infantry, cavalry scouts, platoon forward observers, engineers and others, he said.

The Army is testing both the automatic rifle and new carbine at the same time, but the service expects to field the SAW replacement first, Donahue said.

“The carbine is not far behind,” added Donahue, who declined to say when the new weapons might eventually be fielded.

“The Army has made the replacement of the squad automatic weapon and the M4 carbine – based off of potential enemy threats out there – a top priority,” Donahue said. “We will do everything to make sure that we as rapidly as possible get the right capability into the hands of our soldiers, but we will make sure that the capability that we give them is ready – it is tested, to include significant soldier test points – to make sure that we get is exactly what they need to fight, win, and survive in combat.”