For the U.S. Army, the Future Is Robots 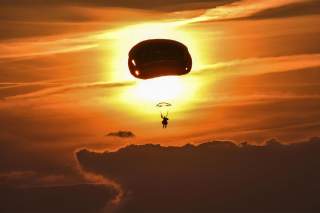 The Army is transforming its fleet of transportable robots to a common set of standards to expedite modernization, interoperability, autonomy and mission flexibility.

During the last decade and a half of ground wars in Iraq and Afghanistan, the Army acquired and fast-tracked as many as 7,000 unique robotic systems in an effort to keep pace with the emerging threat of enemy IEDs.

Building upon these developments, which included the deployment of multiple transportable cave- and road-clearing robots, the service now seeks to architect design a common fleet with a single robotic chassis configurable to a wide range of varying missions,  Bryan McVeigh, the Army's project manager for Force Projection, said in a service statement.

“Previous robots often had just one capability, used expensive, proprietary software, and required more resources for training and maintenance. That means soldiers can do more while learning and carrying less, and that makes a big difference," he added.

To facilitate this effort, the Army is turning to Endeavor Robotics (formerly called iRobot), to acquire common robots called Man-Transportable Robotic Systems, Increment II (MTRS Inc II).  Prior to becoming Endeavor Robotics, iRobot developed and fielded a wide range of portable soldier robots which have been used extensively in combat.

MTRS Inc II is the first of three programs designed to replace those unique robotic systems with enduring programs of record. MTRS Inc II fills the medium sized space (less than 164 lbs.) and comes equipped with a new interoperability profile that sets a standard for how robots, controllers, and payloads communicate, service developers said.

They include the backpackable Small Unmanned Ground Vehicle, initially developed for the now cancelled Future Combat Systems program, which straps onto the backs of dismounted soldiers and uses electro-optical/infrared sensors (EO/IR) to search for dangerous materials. Various sensor payloads are designed to beam back real time images or video of bombs, chemical and biological weapons and even enemy troop locations – all while keeping soldiers at a safer standoff distance.

As use of these systems evolved, they progressively migrated toward increased levels of autonomy.  Rapid advances in computing, processing speed and next generation algorithms quickly enabled a kind of semi autonomy where portable robots performed more and more functions without needing to be operated remotely by a human.

The approach with MTRS Inc II is intended to expedite modernization and sustainment. With a common chassis, common parts and a standard set of IP protocol, a fleet of robots can more quickly integrate software upgrades, new sensors and a range of not-yet-developed technologies.

For instance, if longer range EO/IR sensors with greater resolution, improved heat-detection or better ground-penetrating sensors become available, it will be easier to integrate them across a fleet of robots. Robots can accommodate new payloads, such as sensors which enable better detection in low-light or otherwise low-visibility combat circumstances.

"From a funding perspective, having a common platform and utilizing IOP makes a real difference," Stuart Hatfield, robotics branch chief, deputy chief of staff, G-8, said in a statement.

Production should begin in fiscal year 2019, and, when complete, the Army expects to field 1,210 systems.