The U.S. Army Wants to Equip Its Fighting Vehicles with Lasers and 'Shields' 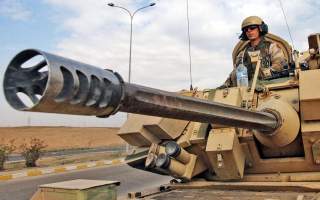 “We may want to use Bradleys as surrogate vehicles to try out some of the technologies available in the marketplace,” Schirmer said.

“We are leveraging new and emerging technology, with an eye towards commonality across many of the BAE Systems built vehicles in the formation, to provide superior capabilities for our troops,” Bazaz said.

Next Generation vehicles, for the 2030s and beyond, Army developers say, will be necessary because their are limits to how far an existing armored vehicle can be upgraded. This requires a delicate balancing act between the short term operational merits of upgrades vs. a longer-term, multi-year developmental approach. Each has its place, Army acquisition leaders emphasize.

The emergence of these weapons, and the fast-changing threat calculus is also, quite naturally, impacting what Army developers call CONOPS, or Concepts of Operations. Longer range sensors and weaponry, of course, can translate into a more dispersed combat area – thus underscoring the importance of command and control systems and weapons with sufficient reach to outrange attacking forces.  The idea of bringing more lethality to the Bradley is not only based upon needing to directly destroy enemy targets but also fundamental to the importance of laying down suppressive fire, enabling forces to maneuver in combat.

As part of these preparations for future ground warfare, Army concept developers and war veterans are quick to point out that armored vehicles, such as a Bradley or even an Abrams tank, have also been impactful in certain counterinsurgency engagements as well.  Accordingly, the term “full-spectrum” often receives much attention among Army leaders, given that the service prides itself on “expecting the unexpected” or being properly suited in the event of any combat circumstance. The Army has now evolved to a new Doctrinal "Operations" approach which places an even greater premium upon winning major power land wars.

“We need to be ready to face near-peers or regional actors with nuclear weapons. It is the risk of not being ready that is too great,” a senior Army official said.