The U.S. Army Wants Its Own "Stealthy" Weapon in the Air 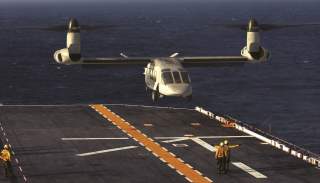 As of January  of this year, Bell engineers are 81-percent complete with the aircraft; the wing is attached and the wiring is put in, Tobin said. In the next few months, Bell engineers will begin installation of the gear boxes and the fuel tanks.

“We had set 230 as the speed requirement because we wanted to push the technology.  We wanted people to bring new ideas and new configurations to the table,” Bailey said.