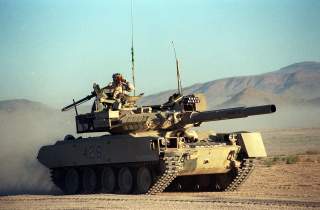 Recently, the U.S. Army has been putting forth a requirement for a new lightweight armored combat vehicle, under the project name of Mobile Protected Firepower (MPF). The role of this vehicle would be to destroy enemy hard targets such as bunkers, engage enemy infantry in buildings and fight enemy armor. The vehicle needs to be light as well, able to be airlifted in a C-17 or even C-130. Most articles speculate that this vehicle will use the 105-millimeter cannon currently in use on the Stryker Mobile Gun System. This cannon is inferior in performance to the 120-millimeter cannon found on the M1A2 SEP v2 main battle tank, America’s foremost armored fighting vehicle. However there is a technology that exists that could allow light vehicles to wield cannons that pack the full punch of those mounted on main battle tanks. It is even mentioned in the U.S. Army’s Combat Vehicle Modernization Strategy as a way to bring large caliber cannon technology to lightweight vehicles. This technology is called RAVEN, which stands for Rarefaction Wave Gun.

The operating principle behind RAVEN is similar to older recoilless guns, in that a limited amount of propellant gas is vented backwards in order to mitigate the recoil force of shooting a projectile. However, unlike recoilless guns, which lose velocity relative to conventional guns, RAVEN guns retain the same velocity and power as a conventional gun while reducing recoil forces and erosion to the gun. This makes this ideal for light vehicles, as the cannon itself can be made from lighter materials, and the vehicle does not need to “dig in” with a spade to stabilize itself before firing. A general rule of thumb, according to Technology of Tanks, from Jane’s, is that a vehicle needs to weigh about one ton for every nine hundred newtons of force exerted on it. This means for the current 120-millimeter M256 cannon shooting a M829A3 Anti-Tank Shell, a vehicle would have to weigh twenty-five tons to withstand the recoil force. This is greater than the weight of America’s last canceled light tank, the M8 Buford. RAVEN technology cuts down on recoil significantly (around 75 percent, in theory) with the way that it vents, allowing for cannons of the same power factor to be mounted on light vehicles.

So how does RAVEN work? Unlike earlier recoilless guns, the chamber in which the propellant and cartridge is placed is sealed at the beginning of the combustion cycle. After ignition, but before the projectile has reached the end of the barrel, the combustion chamber opens and starts venting gas. This venting of the gas gives RAVEN guns their recoilless properties, as the mass of gas leaving the gun by moving backwards compensates for the mass of the projectile moving forwards. This venting of the gas creates a drop in pressure, which then propagates down the gun barrel. This is the eponymous rarefaction wave. The wave then helps propel the projectile down the barrel, allowing it to leave without any loss in velocity. The early venting of the gas means that the materials that comprise the gun heat up less, allowing the gun to fire faster without overheating. This synergizes with the possibility to make guns of a lower weight, due to the recoil reduction granted by RAVEN technology.

But how does it stand up in practice? Several demonstrators have been made and tested. On the thirty-five-millimeter RAVEN demonstrator, muzzle velocity was maintained, while barrel heating was reduced by 41 percent relative to a conventional test gun, and momentum was reduced by 61 percent. In a larger forty-five-millimeter test cannon, muzzle velocity ended up being reduced by 22 percent, but greater decreases in barrel heating and recoil were observed. A 105-millimeter testbed was also built that incorporated a six-round autoloader. Contracts have been awarded to develop ammunition for RAVEN guns.

Disadvantages to RAVEN technology is the need for the gun to vent gas backwards. Similar to recoilless rifles, this limits the proximity in which infantry would be able to operate around an armored vehicle. It also would limit angles of elevation: a vehicle that allowed a RAVEN gun to elevate too high might suffer damage from the blast going onto its deck. The need for a new loading mechanism for RAVEN guns is another engineering challenge. The 105-millimeter RAVEN demonstrator had a swinging chamber that accepted rounds from a carousel autoloader, but this isn’t similar to any setup on existing American tanks. Vehicles would have to be designed for RAVEN from the ground up, or undergo a very lengthy retrofit process to implement this technology.

Overall, RAVEN guns present an interesting, high-caliber armament option that could provide America’s next generation of light vehicles the firepower they need to overmatch any current and future threat. While the technology is not yet mature, it is based squarely on concepts already understood and developed.