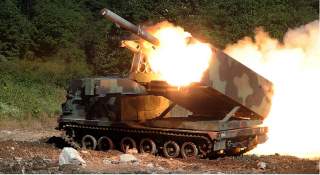 A new "alternative warhead" will destroy enemy targets without leaving dangerous unexploded cluster munition "bomblets" behind, in keeping with an existing international treaty.

The Army plans to fire an upgraded, all-weather, precision-guided, ground-fired rocket which will pinpoint enemy targets at distances up to 70 or more kilometers – while removing the prospect of leaving dangerous unexploded ordnance behind, service and industry officials said.

The weapon, called Guided Multiple Launch Rocket System, is being modified to adhere to the parameters of a 2008 international agreement banning the production and use of so-called “cluster munitions” which disperse a number of small explosive “bomblets” over a target area.

As a result, Lockheed and the Army are now producing a new “Alternative Warhead” for the GMLRS which complies with this international cluster munition agreement.

Cluster weapons, now banned by an international agreement called the Convention on Cluster Munitions, can leave dangerous explosive materials in an area long after an attack has taken place. Naturally, this poses risks to civilians who may wind up in the general proximity of areas previously attacked by the rocket.

Primarily designed for fixed targets, GMLRS can be used to destroy enemy bunkers, troop locations, armored vehicles, equipment or other pertinent high-value targets; during the war in Afghanistan, GMLRS was successfully used to destroy senior members of the Taliban, sources have said.

It is certainly possible, if not likely, that GMLRS is now being fired against ISIS in Iraq - however the Army quite naturally does not often wish to discuss which weapons are being used on an enemy for operational security reasons.

The combat use of GMLRS, along with GPS-guided 155m Excalibur artillery rounds, marked a new era in ground combat wherein Commanders had the option to fire precision-guided weapons from land in a new way; such a phenomenon gave ground Commanders and increased ability to use rockets and artillery as pinpoint offensive attack weapons more effectively, in addition to merely laying down suppressive fire on an enemy location so forces could maneuver.

Some previously-manufactured GMLRS cluster munitions, engineered with a cluster-munitions-type series of small explosives, are no longer being produced by the Army and Lockheed Martin. These warheads, called dual-purpose improved conventional munition, or DPICM, is now being replaced by an alternative warhead “area munition” which will achieve a similar desired battlefield effect without using potentially dangerous cluster bomblets.

“A DoD cluster munition policy from June 2008 created the need for an alternative warhead. You will have zero unexploded ordnance on the battlefield,” Karl Stoetzer, Business Development Manager, Precision Fires, Lockheed Martin Missiles and Fire Control, told Scout Warrior in an interview.

GMLRS uses GPS and Inertial Measurement Navigation technology to guide a 200-pound warhead toward dangerous targets; the idea with the new alternative warhead is to use “height of burst” explosion technology to destroy an enemy target through what’s called an “area effect,” Stoetzer added.

GMLRS can also fire a “unitary” warhead which can destroy underground targets with a delayed fuse or achieve a proximity or “area effect” similar to the alternative warhead.

Each GMLRS Alternative Warhead rocket will be packaged in an MLRS launch pod and will be fired from the Lockheed Martin HIMARS or M270 family of launchers, a Lockheed statement said.

“This is a first of its kind that provides an area effects capability that is cluster munition compliant,” he said.

In addition, the GMLRS Alternative Warhead rocket will allow all users of the MLRS (Multiple Launch Rocket Systems, existing predecessor to GMLRS) to have an area-effects weapon in their inventories without the need to procure additional launcher systems. MLRS rockets with submunition warheads ended production approximately six years ago, a Lockheed statement said.