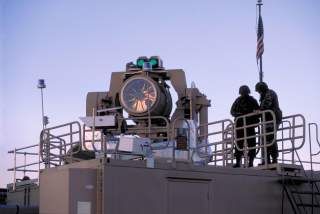 The Army’s Advanced Test High Energy Asset (ATHENA, a nod to the Greek goddess of Wisdom) laser weapon underwent substantial prototype testing at White Sands Missile Range in New Mexico in August, and the results are pretty damn impressive based on new video of the weapon in action.

During testing, manufacturer Lockheed Martin flexed the ATHENA’s muscles — the weapon uses the company’s 30-kilowatt Accelerated Laser Demonstration Initiative (ALADIN), nestled in an advanced system of optics and sensors, to generate the heat energy to burn through drones — to blast the bejesus out of five Outlaw drones, a feat it was happy to show off in highlight reel published on Sept. 20.

Once ATHENA takes aim at the Outlaw drones’ back rudders, they burst into flame, spiral into a tailspin, and freefall to the ground. Though the laser’s “beam” is all but invisible to the naked eye, the drone’s mid-air disintegration is very, very real — and very, very awesome.

“The system defeated airborne targets in flight by causing loss of control and structural failure,” Lockheed Martin said in press release. “Lockheed Martin and the Army will conduct post mission reviews, and data collected will be used to further refine the system, improve model predictions and inform development of future laser systems.”

This is just the Army’s latest step forward with regards to directed energy weapons. In April, the branch unveiled a Stryker Infantry Carrier Vehicle (ICV) prototype specially equipped with Mobile High Energy Laser (MEHEL) system designed to counter ISIS suicide drones. Andd in June, an AH-64 Apache was fitted with a laser developed by Raytheon to experiment with taking out unmanned aerial vehicles, blasting drones out of the sky from 1.4 km away.

But knocking drones out of the sky is just one of the uses that Lockheed envisions for its new laser technology. In the near future, the defense giant hopes to expand the utility of its laser weapons systems to aircraft, ground vehicles, and ships.

“Our technology today is ready to defend against small rockets, artillery shells and mortars, small unmanned aerial vehicles, small attack boats and lightweight ground vehicles that are approximately a mile away,” the company said. “As fiber laser power levels increase, our systems will be able to disable larger threats and do so across greater distances.”

The military is also looking at other applications for laser technology beyond downing pesky UAVs. Air Force Special Operations Command is exploring  the possibility of equipping AC-130J Ghostrider gunship with lasers that can disrupt or destroy communications and electrical systems, as well as enemy infrastructure. And the Navy’s USS Ponce has been using the AN/SEQ-3 Laser Weapon System for defensive purposes against enemy watercraft 2014.

All of this is great, but we hope that, one day, the Pentagon takes the final step towards world domination: sharks with frickin’ laser beams attached to their heads.