The U.S. Army’s Long-Range Missiles Could Be the Perfect Tool to Neutralize China’s Artificial Islands 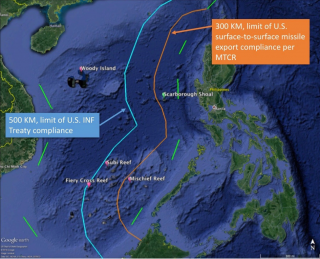 Construction of China’s massive artificial island bases appears to be progressing rapidly, and is likely to transform the military balance of power in the South China Sea. In an unclassified letter, Director of National Intelligence James Clapper assessed that the cluster of island bases will provide China with the ability to “deploy a range of offensive and defensive military capabilities,” as well as “significant capacity to quickly project substantial offensive military power to the region.” He also stated that the facilities would likely be “completed by the end of 2016 or early 2017,” a time frame that is now upon us.

In order to maintain the ability to intervene in defense of U.S. national interests in the South China Sea at a reasonable level of risk and cost, the United States needs to rapidly develop innovative plans and tools to deal with these island bases, with timelines measured in months rather than years.

Fortunately, military history has shown that the most effective military innovation usually takes place with just this sort of specific adversary and operational challenge in mind. As the scholars MacGregor Knox and Williamson Murray demonstrate in The Dynamics of Military Revolution, 1300–2050, the major clusters of innovations that were developed during the interwar period—combined-arms ground warfare, carrier warfare and amphibious warfare—were inspired by the existence of concrete adversaries. Likewise, the Cold War–era first and second offset strategies were intended to exploit U.S. advantages in nuclear weapons and precision-strike, respectively, against the specific challenge of the Soviet army in the European theater. As the U.S. Army and Marine Corps move ahead with their new multi-domain battle concept, the rapid development of China’s artificial island bases presents itself as a looming real-world problem that requires a specific military solution, and soon.

Enter the surface-to-surface missiles that either are or will be in the arsenals of the U.S. Army and Marine Corps: the Army Tactical Missile System (ATACMS, in service) and Long Range Precision Fires missile (LRPF, under development with a planned deployment date of 2027). While China has, over the last decade or two, deployed large numbers of precision-strike long-range surface-to-surface ballistic and cruise missiles, the United States has been slower to do so, limited in part by the Intermediate Nuclear Forces (INF) treaty but also by qualms about the employment of non-nuclear ballistic missiles—concerns that the Chinese leadership clearly does not share. As a result, U.S. maritime power projection and large-volume precision-strike concepts have focused mostly on traditional (and relatively expensive) strike platforms such as fighters, long-range bombers and aircraft carriers. The proximity of China’s artificial islands to allied territory, along with the planned greater reach of the LRPF missile, could provide an opportunity for an alternative approach.

Some accounting is in order: first, based on recent export sales figures, individual ATACMS missiles appear to cost approximately $1.1 million each; their associated air-transportable mobile launchers cost approximately $3.5 million apiece. While these missiles would not be appropriate for truly long-range, penetrating-strike or air-sea-control applications, for the particular problem set of “kicking down the door” of China’s artificial island bases, this appears to be a relatively inexpensive solution. This is especially the case when compared to risking other far-more-expensive strike platforms such as $100-million-or-so Joint Strike Fighters or billion-dollar-plus warships, thereby freeing up those assets for deeper strikes or other high-priority operations.

In the event of U.S.-PRC conflict in the South China Sea, one could envision the employment of a low-cost and brutally effective surface-to-surface missile barrage from the Philippine Islands. This campaign would rain down difficult-to-stop mach-3 missiles from road-mobile launchers hidden in the rugged terrain of the Philippines onto China’s painstakingly constructed island bases. Stealthy ISR (intelligence, surveillance and reconnaissance) platforms such as low-observable drones or submarines (or even drones launched from submarines) could essentially be used as artillery spotters, operating from within China’s anti-air/anti-ship missile umbrella to provide real-time fire direction and battle-damage assessment. The advantages of this concept would include reduced risk associated with keeping high-value, but non-stealthy, strike platforms outside of China’s anti-air and anti-ship cruise and ballistic missiles’ coverage areas until after their reduction by U.S. ballistic missile fire.

Of note, ATACMS missiles were similarly used for air-defense suppression during both U.S. invasions of Iraq as a way to strike missile defenses with low risk and reduce the danger to follow-on strike aircraft, and Air Force special-operations forces still train to do so. Additionally, the relatively quick flight time (about ten minutes at the most) and potential speed of targeting (little strike package planning required) could help to negate the current ability of China’s road-mobile missile systems to pack up and move frequently or after detecting an inbound subsonic cruise-missile attack. Given the air-transportability of the latest mobile ATACMS/LRPF launchers, they could rapidly be flown in to deal with this target set.

Given recent outbursts of anti-Americanism by the Philippine head of state, the promulgation of this specific operational concept could help to clarify in the minds of Philippine leadership that a stable relationship, a financial commitment to buy the necessary weapons systems and a commitment on its part to the use of its territory both in peacetime preparation and in time of conflict, would be necessary preconditions to U.S. cooperation to support alliance commitments in the Spratly Islands and at Scarborough Shoal.

Ideally, the quiet but relentless pursuit of a disproportionately cost-imposing operational plan to neutralize China’s island bases might have a much-needed deterrent effect on plans to continue to militarize them. While the United States has already demonstrated the ability to deploy ATACMS to the Philippines, Manila has shown interest in buying the system and development of the LRPF missile has been quite public, the resulting potential peril to China’s island bases could be made more explicit. For example, additional deterrent value could be gained by the demonstration of rapid and large-scale joint deployment (via U.S. Air Force heavy lift) of Marine and Army ATACMS units, with large numbers of missile reloads brought in by Navy high-speed logistics ships into austere port facilities—as they might have to be in the face of China’s own land-attack ballistic and cruise missiles.

Just as important, the U.S. Army and Marine Corps should radically accelerate the development and large-scale purchase of the LRPF missile, which, at current pace, is years from operational deployment. The United States should also demonstrate, to both our allies and to China, that in the case of a unilateral U.S. intervention from offshore to uphold maritime rule of law or freedom of navigation in the South China Sea, these missiles could even be fired from logistics vessels or any other platform with an open deck that can carry a truck-mounted launcher. Perhaps the United States should also consider a specific waiver to the current U.S. policy on submunitions to support their use against China’s artificial islands, which, after all, were built from scratch as isolated facilities with no native civilian population. In any case, the timeline for action is short.

For quite a while now, U.S. policymakers and planners have spent much time and effort—and, as stated by Chief of Naval Operations Adm. John M. Richardson, sometimes too much—fretting about the range arcs representing China’s various counterintervention systems. In this case, China may have erred by putting massive resources and political capital into building island bases that could happen to reside within range of near-future U.S. surface-to-surface missile systems. The accelerated development and employment of the Army and Marine Corps’ ballistic missiles for this problem set could provide an opportunity to force China’s planners and policymakers to start drawing some unsettling range arcs of their own.

Thomas Shugart is a senior military fellow at the Center for a New American Security and a submarine warfare officer in the U.S. Navy. The opinions expressed here are the author’s and do not represent the official position of the U.S. Navy, Department of Defense or the U.S. government.