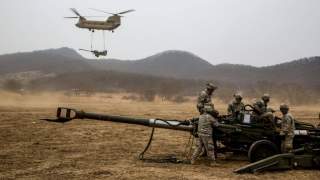 Grigsby explained that live-fire combat at Fort Riley, Kan., affords an opportunity to put these new strategies into effect.

“Every morning I could put a battalion on the north side and a battalion on the south side - and just joust working "Combined Arms Maneuver." I can do battalion-on-battalion and it does involve “Combined Arms” live fire,” said Grigsby. “Because of the airspace that we have here - and use the UAS - I can synchronize from 0-to-18,000 feet and do maneuver indirect fire.”

This includes the use of drones, Air Force air assets, Army attack aviation along with armored vehicles, artillery, tanks and infantry units equipped for small arms fire, he explained.

Some of the main tactics and techniques explored during “Decisive Action” live fire exercises include things like “kill what you shoot at,” “move to contact,” “synchronize indirect fire,” and “call-in 9-line,” (providing aircraft with attack coordinates from the ground), Grigsby said.

Grigsby explained that “live-fire” combat exercises now work to incorporate a wide range of emerging technologies so as to better anticipate the tactics, weapons and systems a future enemy is likely to employ; this includes the greater use of drones or unmanned systems, swarms of mini-drones in the future, emerging computing technology, tank-on-tank warfare tactics, electronic warfare, enemy aircraft and longer-range precision weaponry including anti-tank missiles, guided artillery and missiles.

At the same time, this strategy relies, to some extent, on an ability to leverage a technological edge with a “Combined Arms” approach as well, networking systems and precision weapons able to destroy enemies from farther distances.

In order to incorporate these dynamics into live-fire training, Grigsby said the battalion -on-battalion combat exercises practice a “move to contact” over very large 620 kilometer distances.

“This builds that expeditionary mindset,” he explained.