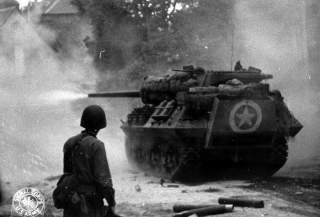 Scooting and Shooting in Tunisia:

The Wolverine mounted a long-barrel high-velocity 76-millimeter gun thoughtto have good armor-piercing performance. However, it had less effective high-explosive shells for use against enemy infantry — at least, compared to the 75-millimeter shells fired by Sherman tanks.