The U.S.-China Relationship: War, Peace or Just Troubled Times Ahead? 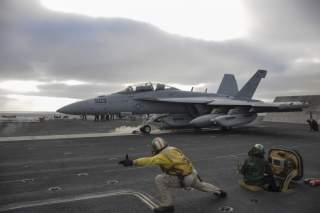 The recent freedom of navigation operation undertaken by the USS Lassen in the South China Sea advertises a new sharper edge to U.S.–China relations.

Some analysts have begun to write about a ‘tipping point’ in the relationship (see here and here); media reports sometimes talk of a relationship in crisis. It’s not that bad—yet—but things are getting more serious. To see why, we need to look at the broader regional landscape and then fit U.S.–China relations into that. The U.S.–China bilateral relationship is undoubtedly the region’s most important, but Asia’s no G2—it’s a large theatre with no common front line and a high level of economic interdependence.

Indeed, we’re moving into a world of uneven multipolarity in Asia. It’s easiest to see the shift by using a long baseline: compare the relative weightings of the major players in 1995 with what they are now. In 1995 U.S. preponderance was so marked that all other players looked like minions. But 20 years later we see an Asia characterized by a number of strong players: China, Japan and India in the top tier; South Korea, Australia, Indonesia in the second tier; and a range of regional states—like Vietnam—in fast-growing Southeast Asia.

Still, power relativities are shifting more than regional order. Japan’s determined to add some cross-bracing to the current order, seeing that as offering the legitimacy it needs for a larger role. India doesn’t have the influence or the wish to redesign the East Asian order: its growing gravitational weight is still felt most in the Indian Ocean and on the subcontinent. And China’s strategic vision still emphasises a Great Wall, a set of deferential neighbors, and a smaller U.S. presence in proximity to the Wall. But China doesn’t like the current order, which was built at a time when it was weak. It doesn’t believe that, in the long run, the Asian regional order should be shaped in Washington.

The second-tier players are generally too weak to promote their own visions of an Asian order. South Korea and Australia are, in any event, both U.S. allies. Indonesia isn’t, but—like most ASEAN states—it’s disposed to prefer either U.S. primacy to Chinese hegemony or (at worst) a stable great-power equipoise in a peaceful multipolar Asia.

The U.S. is attempting a ‘rebalance’ to Asia. But Washington’s conscious of its global obligations (including to Europe and the Middle East), weary after 14 years of effort post-9/11, and keen to address a range of domestic issues. It knows too that even a successful rebalance won’t restore the U.S. to the degree of primacy it enjoyed in the 1990s.

So in the long run, the US seeks a modus vivendi with a rising, peaceful China. The two countries’ annual Strategic and Economic Dialogue and growing trade figures underline that objective (bilateral trade has grown by 7,550% 1985-2014). But read Lawrence Summers’ latest piece for The Washington Post: “the world—including China—is unprepared for China’s rise.” Summers believes the U.S. still has serious questions to answer in relation to the relationship. Does it want a more prosperous China or a less prosperous one? Does it have a coherent picture of its preferences in terms of China’s policy choices? Does it have a sensible picture of future architectural arrangements?

Similar questions exist in the strategic field: does the U.S. want a stronger China whose weight is felt more around the region or a weaker China whose weight is felt less? For the U.S.—and Australia—the answer, of course, varies depending on what sort of great power China turns out to be. In the South China Sea we see a coercive power, not a consultative one—a power unwilling to accept international arbitration. Nationalism’s a potent driver in Chinese foreign policy at the moment. Moreover, China’s growing weight is felt most starkly along the Eurasian rimlands, in ways that are corrosive of the current strategic order. The contests in the East China Sea and South China Sea aren’t really about rocks—they’re about hierarchy in a future regional security environment.

And there’s a second level of complication: the U.S. and China have to work out their relationship in full view of the region—a region which includes a number of U.S. allies who don’t want the U.S. to treat China as a peer. They worry that its doing so would imply a marginalization of the hub-and-spokes structure.

The good news is that the Thucydides ‘trap’ isn’t inevitable: rising powers aren’t doomed to clash with established ones. Economic interdependence and nuclear weapons lessen the prospects of war. And military manoeuvring in the South China Sea is still about ‘signalling’, not conflict. But the bad news is that some form of clash seems increasingly likely. The U.S. can’t move to offshore balancing without spooking its own allies; but China’s idea of the U.S. as an ‘outsider’ implies just such a shrinking role for the U.S. in Asia. Troubled waters lie ahead.

Rod Lyon is a senior fellow at ASPI, where this piece first appeared.