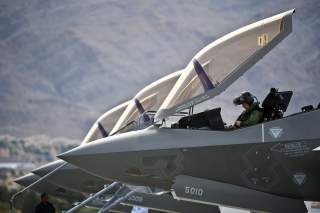 Compared to the previous prototype, the new version features a host of refinements and has started to resemble a genuine fifth-generation stealth aircraft in many ways. Clearly, Beijing is making progress in the aerospace arena—helped in this case by technology that was almost certainly stolen from the Lockheed Martin F-35 Joint Strike Fighter program.

While it is not clear where or even if the FC-31—previously known as the J-31—fits into the Chinese People’s Liberation Army Air Force’s (PLAAF) order of battle, one of Beijing’s goals for the new aircraft is to secure a foothold in the export market. Indeed, China hopes to compete directly with the Lockheed Martin F-35 for orders around the world—as stated by both PLAAF and company officials.

“I believe the aircraft will have bright prospects in the market. Based on my experience and knowledge, I presume its price will be around $70 million, about half that of the United States' Lockheed Martin F-35 Lightning II,” Fu Qianshao, an aircraft expert with the PLAAF told the China Daily. “Moreover, the fourth-generation Eurofighter Typhoon and Dassault Rafale fighter jets are priced at about $100 million. All of these mean you can spend a lot less money to get an advanced, fifth-generation stealth combat plane.”

One of the Aviation Industry Corp of China’s (AVIC) stated goals for the FC-31 has been to “put an end to some nations' monopolies on the fifth-generation fighter jet” according to company officials. However, while breaking Lockheed Martin’s death grip on the fifth-generation stealth fighter market might be the goal, it is easier said than done. Right now, Lockheed Martin is the only fighter manufacturer to have developed and successfully fielded not one, but two, fifth-generation stealth fighters—the powerful F-22 Raptor and the tri-service F-35.

China faces a number of hurdles in accomplishing its goals. While Beijing is rapidly catching up on developing advanced sensors such as active electronically scanned array radars, electronic warfare systems, electro-optical/infrared targeting systems and even sensor fusion, it still severely lags behind in jet engine technology. China seems to have made some progress on that front, but at the end of the day, jet engines are the Achilles’ heel of Beijing’s aerospace industry.

Currently, the FC-31 is believed to be powered by a pair of Russian-made Klimov RD-93 afterburning turbofans each developing roughly 18,000lb of thrust at maximum power. The Chinese hope to replace those engines with a pair of indigenous WS-13E turbofans, which are expected to develop roughly 22,000lbs of thrust. However, those engines are not ready for prime time—and it is unclear when or even if they ever really will be.

The Chinese contend that with indigenous engines, the FC-31 would be more advanced than the F-35. “In many ways, it is not inferior to the US F-35,” Lin Zuoming, chairman of Aviation Industry Corp of China, told China Daily when the original FC-31 prototype flew in 2012. “If fitted with either of the two types of our newly-developed engines, it will be more advanced than the U.S. model.”

While the Chinese contention is marketing hyperbole, without an indigenously developed engine, Beijing will be dependent on Moscow’s largesse for overseas sales of the FC-31. Effectively, Russia—which will also be a competitor—will have a veto on sales in the few markets where Chinese weapons are competitive (i.e. those markets the United States won’t sell to). As such, until China sorts out its issues with developing and producing a reliable jet engine, Beijing’s chances on the international fighter market with the FC-31 are fairly slim.