The U.S.-China Summit's Big Accomplishment: 'Rules' in the Sky? 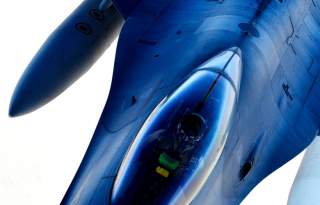 Media reporting from the third summit between U.S. President Barack Obama and Chinese President Xi Jinping was dominated by cybercrime and news of cooperation on greenhouse gases. But observers interested in U.S.-China relations and Asian security matters should also pay attention to a little-noticed accord signed by the U.S. and Chinese militaries on “Rules of Behavior for Safety of Air-to-Air Encounters.”

The agreement is an annex to the Memorandum of Understanding (MOU) on rules of behavior for safe military encounters at sea and in the air that was signed at the prior Obama-Xi summit in November 2014. The now completed MOU underscores the commitment by the U.S. and China to reduce the risk of unintended military incidents that could harm the overall relationship.

Reaching agreement on best practices to ensure safe navigation when American and Chinese military assets come into close proximity is a milestone. This landmark achievement was made possible in large part by Xi Jinping's recognition of the increased danger of U.S.-Chinese military accidents and the damage they could do to bilateral ties. The Chinese armed forces also deserve credit for realizing the need for the PLA to have a common understanding of operational safety with the international community.

The recently inked Annex of the Rules of Behavior for Air-to-Air Encounters establishes procedures to prevent collisions between U.S. and Chinese military aircraft such as occurred in 2001 between a Chinese fighter and U.S. surveillance plane. Unsafe intercepts have continued, though they have decreased in frequency over the past year, with the most recent incident occurring on September 15 when a Chinese fighter came within 500 feet of an American reconnaissance plane. In 2014 there were at least five incidents. The most serious near miss involved a Chinese fighter that came within 30 feet of a US P-8 Navy surveillance aircraft. A Pentagon spokesman described the Chinese warplane's actions as “very, very close, very dangerous.” The Chinese fighter purportedly flew above, underneath, and alongside the U.S. surveillance craft, and at one point performed a barrel roll to display its weapons.

The norms of behavior set out in the Air-to-Air Encounters annex are consistent with the Convention on International Civil Aviation (which contains provisions guiding civilian flights and encounters between civilian and military planes), and the Code of Unplanned Encounters at Sea (CUES; which contains guidelines for encounters of naval aircraft). The agreement breaks new ground in establishing rules of engagement between military aircraft of different countries.

To avoid mishaps, the two sides agreed that aircraft operators should engage in active communications in the interest of flight safety. This includes clarifying their identity and conveying aircraft maneuvering intentions. Pilots will conduct communications in English, refrain from uncivil language and physical gestures, and use internationally accepted radio frequencies for air distress.

Especially noteworthy is the section that establishes responsibilities for aircraft when an intercept takes place. According to the agreement, the aircraft commander initiating the intercept should maintain safe separation while the operator of the aircraft being intercepted should avoid reckless maneuvers. The distance between aircraft that constitutes safe separation is not spelled out; rather it is dependent on circumstances. While this is sensible, it leaves split-second decisions up to the discretion of Chinese fighter pilots, who often lack experience.

One missing element is any provision for emergency landing rights. Perhaps it was impossible to agree on a common position, even though 14 years have passed since the U.S. landed an EP-3 on Hainan Island after a Chinese J-8 fighter jet collided with it in flight. In addition, in several places, the text includes the language 'if mission permits,' suggesting that in some circumstances either side can refuse to implement the agreed-upon rules of behavior. For example, a U.S. bomber flying through China's Air Defense Identification Zone in the East China Sea to demonstrate freedom navigation and transit through international airspace would not likely communicate with a PLA Air Force interceptor aircraft.

Unlike U.S. and Chinese surface naval vessels, which have practiced CUES procedures on several occasions since the two nations signed up to them last year, there are currently no plans to practice implementation of the protocols laid out in the new air-to-air encounters agreement. The U.S. and Chinese air forces don't hold joint exercises and are unlikely to for the foreseeable future.

A positive development is that the signing of the MOU has reinvigorated U.S.-China consultations within the Military Maritime Consultative Agreement (MMCA), which was created in 1998, but failed to serve as an effective mechanism for ensuring operational safety. The MMCA was essentially moribund until Xi Jinping's rise to power in late 2012 breathed new life into the U.S.-China military-to-military relationship. Going forward, incidents between U.S. and Chinese ships and aircraft will be discussed in the MMCA.

The now-completed MOU on rules of behavior for safe military encounters at sea and in the air is not a panacea for the U.S.-China military relationship. The PLA will continue, for example, to criticize U.S. close-in surveillance operations near Chinese territory as well as U.S. arms sales to Taiwan. For their part, the U.S. military remains concerned about the possibility that China will use its newly-built artificial islands in the South China Sea to exert control over the air and sea within China's nine-dashed line.

Nevertheless, this confidence-building measure, if strictly implemented by both sides, can reduce the risk of accidents between American and Chinese forces operating in increasingly close proximity to each other.