The U.S. Congress Is Trying to Give the F-35 a Pass for All Its Problems 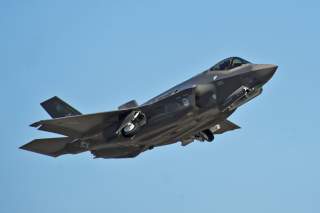 The $700-billion defense authorization bill for 2018 contains a number of provisions that are likely to increase the risk of cost overruns for the F-35 Joint Strike Fighter program and undermine the ability of Pentagon officials and Congress to assess the combat suitability of new weapon systems in the future.

One of the central debates for the F-35 program is whether it will be more combat-capable than the systems it is replacing. The most controversial of these claims has been that the F-35 would be an acceptable close air support replacement for the A-10 — which even Air Force officials eventually backed away from.

Air Force officials committed to a fly-off between the A-10 and the F-35, and Congress codified the test in law as a condition for retiring A-10s.

But now a provision in the House’s version of the National Defense Authorization Act could jeopardize this and other comparative tests against legacy systems. As we explained in a letter to the Armed Services committees, the language could improperly restrict the Director of Operational Test and Evaluation’s ability to evaluate combat effectiveness of new systems by prohibiting new testing that compares legacy systems against the new ones.

Instead, DOT&E could only compare new systems against their predecessors “if such items or components exist and relevant data are available without requiring additional testing.”

For the F-35 program, this means the Air Force could skip the fly off altogether since it would require new testing. Across the Department, this would present a significant roadblock to determining whether the military and taxpayers are getting bang for their buck.

Without actual comparative testing of new systems — which are almost always considerably more expensive than the legacy systems — it will be difficult if not impossible to know whether there is an actual gain in capability over legacy systems, and, if so, whether that gain is worth the extra cost and additional logistic and maintenance burdens.

Both the House and Senate versions of the National Defense Authorization Act  authorizes a block buy of 440 F-35s through a procurement process called “Economic Order Quantity,” even though the planes are still being developed and the testing necessary to prove they are operationally effective won’t be completed for years. Until that testing is done, all the American people will get for their money is a pile of parts for an unproven prototype.

The Defense Department has a variety of tools to purchase in bulk, with varying levels of cost controls. As we wrote previously, purchasing F-35s through a normal economic order quantity rather than a multiyear procurement would have allowed the department to avoid legal requirements established for multiyear procurements to demonstrate they were achieving cost savings.

Effectively, the language proposed by the department would have been a blank check. Instead, both the House and Senate bills included a modicum of restraint to the economic order quantity by modifying it with a requirement for the department to obtain an independent certification of cost savings and minimal risk of major design changes.

The problem, of course, is that even the Pentagon admits that costs for the program are going up, not down. The program is also entering its most complex stage of development and testing, particularly when it comes to the software essential for these planes to be effective in combat, which will likely involve expensive fixes.

Program managers are also hiding key information about the safety of F-35s, as John Donnelly from CQ revealed this week. In October 2015 Donnelly reported the plane’s ejection seats posed “a heightened risk of fatal whiplash during an emergency ejection” to pilots. This risk was increased by a heavy $600,000 helmet, which could pose “a risk of severe neck injury.”

Program officials assured the public in May that those problems have been addressed. But Donnelly recently unearthed an internal Air Force safety report that found the ejection seats still pose a “serious” risk of death. Although the program says it already addressed the problem, thus far it seems to be cutting corners by forgoing testing — which would likely only cost a few million dollars — and failing to address safety concerns raised by DOT&E about the canopy as well.

Previously we expressed concerns that the concurrency in the program — the premature rush into production before development and testing is complete — would create “concurrency orphans.” These are aircraft purchased at full price that would be too expensive to fix to ever make them combat capable. Stephen Trimble at Flight Global reports that the chickens may be coming home to roost as the program office considers foregoing upgrades to aircraft purchased early in the program, resulting in 108 concurrency orphans.

It is clear the F-35 program needs more adult supervision. We hope the committees will ramp up oversight of these issues to ensure aircraft are effective, safe and affordable. The men and women who will take these into harm’s way deserve nothing less.

This story originally appeared at the Project on Government Oversight.