The U.S. Marine Corps Hopes to Equip Its Troops with This Rifle 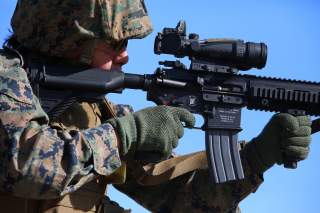 The Marine Corps infantry rifle could be seeing an upgrade in the very near future.

On Aug. 11, the U.S. Marine Corps issued a Notice of Intent to Sole Source for more than 50,000 new M27 Infantry Automatic Rifles from Heckler & Koch. This is a significantly large jump from the 11,000 stated in a Request For Information originally issued at the beginning of 2017, which sparked speculation that the Corps was looking to replace its M4s.

The initial RFI was followed by a notice in May calling on weapons vendors to show off their latest weapons technologies, including new suppressors, optics, and 5.56x45mm rifles similar to the M27, signaling the Corps wanted to at least consider alternatives to the Heckler & Koch-made M27. But, given this latest intent to sole source, Heckler & Koch apparently remains the best option for the Corps.

“Everything I have seen suggests that the M27s we have been using for some time have been the most reliable, durable, and accurate weapons in our rifle squads,” Marine Commandant Gen. Robert Neller said in a ­statement back in April. However, cost has been a primary issue given than the M27 can run up to $3,000 a rifle.

While typically the Department of Defense issues solicitations calling for a competitive bidding process, in this case, the DoD has determined it would result in “substantial duplication of costs to the Government that are not expected to be recovered through competition and unacceptable delays in fulfilling the agency’s requirements.” However, the notice states that if a source can meet the requirements, then they are permitted to submit a proposal no later than Aug. 28.

The HK416, on which the M27 IAR is based, was recently adopted by the French army; and it is likely that if Heckler & Koch gets the M27 contract, the Corps will be purchasing a newer version of this rifle.

It should also be noted that a contract for 50,000 rifles is not large enough to equip every Marine with an M27, but it may be the beginning of that process. While it remains to be seen if the Marine Corps will actually award a contract for over 50,000 new rifles, this new notice does little to quiet the speculation that some within the service want to replace the M4 with the M27.