Is the US Marine Corps Ready for the Wars of the Future? 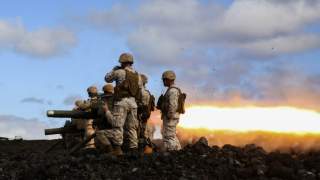 The United States Marine Corps will have to adapt to face off against emerging threats in 2025 and beyond. While the Marines had developed a deep counterinsurgency expertise for the wars in Iraq and Afghanistan, the future is more likely to mirror more recent conflicts in Eastern Europe and Syria, the service’s top uniformed official told an audience at the Center for Strategic and International Studies (CSIS).

“We’re in the process of looking at the overall force structure that we have trying to project to what that force is going to look like in 2025,” Gen. Robert Neller, commandant of the Marine Corps, said on Aug. 9. “We realize that there’s a certain set of capabilities—not just for anti-access/area denial (A2/AD)—but for any sort of near peer fight that we have not had to deal with.”

The Marine Corps has not had to deal with many of the traditional skills that ground forces typically have to practice, Neller said. Those skills range from simply learning how to apply camouflage paint and netting, to living out in the field and land navigation. Moreover, the Marine Corps has not had many opportunities to practice large scale maneuver warfare using combined arms against advanced threats, Neller said. But there are also entirely new skill sets like cyberwar that the Marines must learn to engage in.

The Marine Corps has two roughly similar concepts for its future force structure, but it is in the process of integrating those ideas into a single coherent plan, Neller said. But the service has already taken some steps in preparation for fighting in those high-threat environments. For example, the Marines are integrating many of the so-called hybrid warfare techniques that have been used by Russian-backed separatists in Eastern Ukraine into its training regimen. That includes the use of information warfare and electronic warfare—as well as the integration of enemy drones. “We’ve started to train more force on force out at 29 Palms and we’ve given our adversaries—the OPFOR, the opposing force—UAVs,” Neller said. “So Marines are in a built-up area walking down the street—and then they look up in the sky, there’s this small quad-copter UAV.”

Neller also addressed A2/AD challenges facing the Marine Corps during an amphibious landing. Neller noted the conditions for an amphibious landing have to be set by the Navy and its carriers before the Marines attempt to go ashore. However, even once the enemy’s defenses have been beaten back, some of the most dangerous threats faced by the Marines are coastal mines that are difficult to counter. “We still struggle with mines,” Neller said. “One of the areas we need to work harder on is the clearance of mines in the shallow water surf zone and the craft landing zone.”

The bottom line for the Marine Corps is that it will have to adapt to a new era of conflict that in some ways resembles the Cold War—but is much more complicated, Neller said. The service has to be ready for a spectrum of conflict—and for the first time in decades—prepare for instances where its ground forces come under enemy air attack or where its communications are jammed, Neller added. “The key thing is we’ve got good people, and they’ll help us find a solution to these problems,” Neller said.