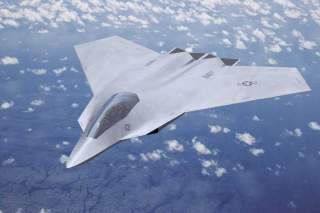 Earlier this year, Chief of Naval Operations Admiral Jonathan Greenert said that he believed that the F/A-XX, the Navy’s planned eventual follow-on to the F-35C, would be "optionally manned". On April 15 at the Sea-Air-Space conference, Navy Secretary Ray Mabus leaned further forward, noting how he believed that "the F-35 should be, and almost certainly will be, the last manned strike fighter aircraft the Department of the Navy will ever buy or fly.” At the same time, Mabus announced that he would be establishing a new post of deputy assistant secretary of the Navy for unmanned systems—a secretary of drones, so to speak. That evening, Senate Armed Service Committee Chairman John McCain said that “I hope the sentiments expressed by Secretary Mabus… will be reflected in the Navy's future programmatic decisions.” For as the senator knows, that’s where the actual plans depart from the strategic narrative. The program is still focused on manned aviation, and that questionably supports future strategic needs.

Maybe drones can’t do everything. The US Air Force is mostly enthused about drones, with a corporate position that long-endurance surveillance should be automated. The service is replacing U-2 Dragon Ladies with MQ-4 Global Hawks, and reducing its fleet of MC-12 Liberties, while continuing to buy MQ-9 Reapers. This drone strike-fighter business, though, USAF Chief of Staff General Mark Welch might call a bunch of hooey. At Defense One’s event last Wednesday, the chief insisted that the USAF’s follow-on to the F-35A would absolutely be manned, as “having the human brain as a sensor in combat is still immensely important.” As Sam Lagrone noted, while the SecNav mentioned strike—attacking targets on land or on the waves—he pointedly did not address combat in the air. But John Stillion of the CSBA has recently argued that even beyond-visual-range (BVR) aerial combat can be partly automated, with hunting-dog drones scouting and shooting for manned fighters coming up from behind.

Let’s get back to those manned fighters for a moment. With several wars underway for over thirteen years now, the Navy has been flying its Hornets, As through Fs, far more than planned—about 350 hours annually. The A through D early-model Hornets are thus wearing out faster than planned—about 40 aircraft annually. The Navy is not buying F-18Es and Fs at nearly that rate, so the number of all Hornets in combat service has been dropping—to now only 44 aircraft per ship. Production of those F-35Cs—expressly meant to replace the F-18As through Ds—has of course been delayed. Worse, at the prices charged, the Navy would need to raid the Air Force’s budget to fill its decks with even as many planes as it has now. (Lockheed Martin insists that the price will eventually close on that of the Super Hornet, but is providing no guarantees.) Thus, the Navy wants to continue buying Super Hornets for a few more years until the C-model of the Lightning II is actually at full-rate production.

In short, the Navy believes that it needs long-range drones in the long run, but more short-range manned strike fighters in the short run. Maybe that's not cognitive dissonance, but it’s still a problem.

(Recommended: 5 U.S. Weapons of War that ISIS Should Fear)

As I heard a retired carrier admiral say recently, with squadrons of J-20s coming eastbound, a supercarrier in the China Seas might need all 44 of those F-18s just to defend itself. In most models of modern aerial combat, a friend at Lockheed Martin once told me, “everybody dies.” Stealth or not, it’s hard to hide jet exhaust, the skies are pretty open, and infrared search-and-tracking systems are improving. While all-aspect BVR missiles worked very badly in the Vietnam War, they now account for most of the air-to-air kills. There's hardly any opportunity these days to merge to dogfight, or even disengage. So carriers might blow through fighters and pilots pretty fast. If the ships can stay afloat through such a bloody battle in the western Pacific, they’d need replacement aircraft pronto.

The trouble is that Boeing and Lockheed have about zero surge capacity for fighters, and training new jet jockeys can take years. That’s where drones come back in. Training a drone pilot takes a fraction of that time. Building a drone is cheaper and should be quicker too. So long as they are taken out and flown occasionally, drones can be stockpiled as a war reserve. And if there’s common ground in the Hendrix-McGrath supercarrier debate, it’s agreement that the Navy needs to buy a lot of really long-range drones, whether as bombers, missile sherpas, or long-range scouts. Moreover, it needs those aircraft now, so that the fleet can practice and experiment operationally with massed manned-unmanned teaming in the air. Just don’t tell me that money is short: the Navy first mastered carrier operations in the 1930s.

With Mackenzie Eaglen of the American Enterprise Institute, McGrath was recently lamenting the Navy’s seemingly steadfast decision to retire Northrop Grumman’s X-47B demonstrator drone. The plane has had a brilliant test program: it launches from carriers, takes fuel from tankers, and lands on carriers. Other drones have been dropping bombs and shooting missiles for all of those thirteen years of war. Maybe at this point, rather than flying the tails off the Hornets, groaning again about the state of the JSF program, or complaining about sequestration, the Navy could move out smartly. By de-emphasizing manned aviation sooner—whether F-18s or F-35s—the Navy could accelerate its UCLASS program. Four prospective contractors—Boeing, Lockheed,Northrop, and General Atomics—are lined up with prototypes. One or two of those companies ought to be building the real ones, and sooner than later.

James Hasík is a senior fellow at the Atlantic Council’s Brent Scowcroft Center on International Security where this piece first appeared.