The U.S. Military Could Soon Have the Ultimate Weapon: 'Iron Man' Suits 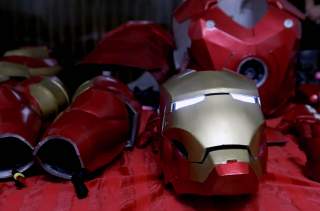 U.S. Special Operations Command, the umbrella organization for America's commandos, is soliciting proposals for the Tactical Assault Light Operator Suit (TALOS) an exoskeleton that will give American soldiers superhuman abilities.

- An exoskeleton that can be either powered or unpowered. An unpowered version should be able to carry a seventy-five-pound load, while a powered model could lift 150 pounds.

- A suite of sensors, including microwave Doppler imaging and echolocation mapping. The exoskeleton should provide the operator with a 360-degree view, as well as capture sound from all directions.

- Provide strong protection for the operator. "Of particular interest is protection for the face and head," SOCOM notes. "Novel, ergonomic fragmentation protection capabilities are also desired for protection of junction regions of the body." SOCOM also wants a transparent helmet visor that offers "full-face protection against advanced rifle rounds without operator discomfort or distraction." The suit should also accommodate additional armor protection that can be mounted on the frame.

- Sophisticated fire control that allows the operator to aim a weapon without using the sight on the weapon, as well as "systems which enable visualization of projectile flight path."

- See through walls and other solid surfaces.

- The exoskeleton should be powered by a low-noise, backpack-sized power source that can provide several kilowatts of power for several hours. It should also allow the operator to control how much heat and sound the exoskeleton emits, which is crucial for minimizing detection.

- An exoskeleton that monitors the physiological status of the operator. Interestingly, SOCOM also wants a suit that tracks the operator's mental cognitive state.

While TALOS is sure to capture the popular imagination with its echoes of Iron Man and Starship Troopers, some critics question whether weight, power consumption and the reliability of many complex systems will make the suit more of a liability. "Just about every feature of this dream suit has showed up at some point in movies or video games," argues defense website SOFREP.

"One might almost be tempted to suggest that the people pushing this need to spend less time in front of a screen and more time in the field."

SOCOM's TALOS solicitation will be open until December 2018. In February 2017, SOCOM officials had predicted a TALOS prototype by about mid-2018.