The U.S. Military Has a Plan to Make Sure Russia and China Can't Win a Great Power War 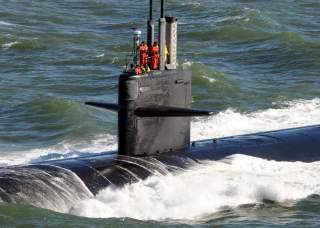 America’s military-technological advantage, an aspect of its strategic power since the end of the Cold War, is eroding. In response, the Pentagon launched the third offset strategy in 2014—a department-wide effort to find new ways, both technological and institutional, to leap ahead of its competitors. In a new report for the United States Studies Centre, I argue that for the US the third offset is partly an answer to matching its stagnating defence budget with its strategic ambitions.

As Washington concentrated on fighting wars in Iraq and Afghanistan, Beijing (and Moscow) invested in advanced missile technology, satellites, intelligence and reconnaissance assets, and networking capabilities. That has allowed China and Russia to employ anti-access and area denial (A2AD) strategies that have raised the cost and risk to the US if it decides to intervene in a conflict close to those countries’ borders. The decreasing effectiveness of American forces in a high-end conventional conflict may also have an impact on Washington’s credibility with allies in the region.

But A2AD strategies are only one part of a broader set of challenges the US faces to its continuing military superiority. Another is an emerging great-power competition over strategic technologies. Access to technical and scientific innovation is proliferating. China is investing heavily in an effort to create new national industries in artificial intelligence, quantum computing and robotics, and it’s building up an advanced defence industrial base. It is also making significant reforms to the People’s Liberation Army, shrinking its size and strengthening its logistical and support capabilities in an effort to fight and win ‘local wars under informationised conditions’.

Further, technological funding and innovation have shifted from government labs to the private sector, particularly in critical technologies like artificial intelligence. The increasing focus on dual-use technologies, investments in new start-ups and technical talent reflects new areas of geostrategic rivalry. This trend has even been evident in Australia, particularly in the higher education sector.

Finally, the cost to the US of maintaining its lead is growing. This is occurring along two fronts. First, the US’s existing platforms and capabilities are unable to adequately and cost-effectively defend themselves in a ‘salvo competition’. Second, Washington is likely to continue to face budget caps that will hamper its ability to compete with China on a platform-for-platform basis. This is evident from the range of priorities that are competing for limited resources, including nuclear modernization, army procurement programs and military readiness.

Rather than a single strategy, the third offset is more accurately described as a set of three interrelated efforts. The first involves placing bets on current and future technologies that will, in theory, allow the US military to maintain its ability to project power into contested environments. The second looks to some of the new technologies, like AI, unmanned systems and solid-state lasers, to permit the US to economically compete with great powers and simultaneously maintain its global military posture. The third effort involves reforming and building on the way the Pentagon procures and develops new technologies to take advantage of private-sector developments.

The Pentagon is largely continuing these efforts under Secretary of Defense James Mattis, even if ‘third offset’ has been dropped from the official lexicon. New organizations like the Defense Innovation Board, headed by Alphabet chairman Eric Schmidt, continue to meet, and others, like the Defense Innovation Unit Experimental (DIUx), have increased their presence in Silicon Valley and are starting to see some successes. The Pentagon has continued to increase its research, development, testing and evaluation budget requests; appropriation increased by 11.2% in fiscal year 2018 compared to 2017. Another study has estimated that individual budget lines and projects for a range of third offset technologies increased by 43% between fiscal years 2015 and 2017, representing a ‘serious strategic uplift’.

While these individual budget increases are positive signs, there appears to be little consensus or movement to raise the Budget Control Act caps in an effort to move some third offset capabilities from prototype to production. One recent example is the US Navy’s electromagnetic railgun technology: resources started shifting away from it towards more conventional-powered artillery as it neared the final testing and evaluation stage.

For Australia, the third offset’s success or failure will have profound implications for the US’s future military posture in the Indo-Pacific. The third offset can’t replace Washington’s political will or national interest in maintaining the US alliance system, but it can provide a degree of reassurance for allies that worry about the effectiveness of US forces in a high-end conflict. As the third offset will benefit from an exchange of defense science information and coordination, as well as input from multiple allies on new operational concepts and innovation, Australia is well positioned to contribute in a meaningful way.

Brendan Thomas-Noone is a research fellow at the United States Studies Centre at the University of Sydney.