The U.S. Military Has a Plan to Take Over a Potential Enemies Greatest Weapon 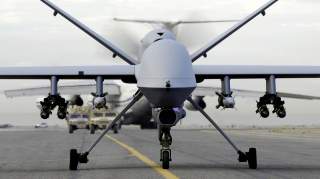 A number of government agencies are working with industry to develop an emerging technology designed to take over the signal or an attacking enemy drone, enforcing perimeter security at sensitive U.S. sites and Forward Operating Bases in high-risk combat zones.

“We go after the drone signal, not the frequency,” Johnathan Hunter, CEO, Department 13 International, told Scout Warrior in an interview.

The technology, called Mesmer, does not “jam” an attacking drone but rather manipulates its protocol, at times allowing users of the system to completely take over flight of the drone.

IP protocol can be amended to adhere to new connections and controls, permitting Mesmer to take over control of approaching enemy drones.

There are seven layers of protocol used by computers, drones and software programmable systems to communicate with one another. Changing a “bit” or two from a “one” to a “zero,” for instance, can reconfigure a drone signal so that it can only communicate with its new controller, Hunter explained.

Hunter said Mesmer was used to take down a drone in a demonstration in March of last year, and has recently been shown to various U.S. military, law-enforcement and federal government agencies.

“With protocol manipulation, you have complete control over the drone. You can hover, land, start sending it home or even fly the drone. When you jam, you jam all the frequencies used by that drone. We only affect the signal of the drone,” Hunter said.

The Pentagon’s research arm, DARPA, the Department of Homeland Security, Department of State and Department of Justice are among the federal agencies currently observing testing and development of Mesmer.

Mesmer was also used last year as part of a U.S. military exercise called “Black Dart” designed to assess a range of counter-drone technologies in tests at Point Magu Naval Base in Ventura, Calif.

Also, Department 13 is now working on a response to a DARPA solicitation for a next-generation Mesmer-like technology, Hunter explained.

Despite the promise of Mesmer, the technology only works upon the protocols used by “known” drones and would likely be ineffective against signals emitted by unknown enemy drones such as those from certain potential adversaries around the globe.

At the moment, Mesmer can access and take over the signal of at least 10 drones as part of their system, a number which represents about 75 percent of the marketplace, Hunter said. Within six months, Department 13 plans Mesmer to have an ability to take over 90 percent of known commercial drones.

Mesmer uses a library-based system that it is focused on domestic security and various commercial markets applications. The company is developing a catalogue of foreign drones of systems from some likely enemies.