The U.S. Military Needs to Be Ready to Wage 3 Very Different Types of Wars 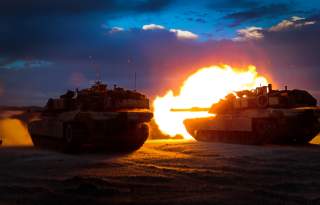 As rival powers rise to challenge the United States, the Pentagon is faced with the problem of how to face down a spectrum of challenges that range from nuclear deterrence, to high-end conventional wars to the low-end counterinsurgency fights. The United States military has to be able to do all three of those things at the same time, but the question for the Pentagon is how.

“This is our problem statement,” Defense Secretary Jim Mattis told an audience at the Association of the U.S. Army Exposition on Oct. 9. “How to maintain a safe and secure nuclear deterrent and maintain a decisive conventional force that can also fight irregular warfare.”

The Defense Department is taking a three-pronged approach to the problem.

“First, everything we must do must contribute to the increased lethality of our military,” Mattis said. “We must never lose sight of the fact that we have no God-given right to victory on the battlefield... Even as our competitive edge over our foes and adversaries decreases due to budgetary confusion in this town and the budget caps, I am among the majority in this country that believes our nation can afford survival.  And I want the Congress back in the driver's seat of budget decisions, not in the spectator's seat of automatic cuts.”

The Pentagon’s second line of effort—which seems to directly contradict President Donald Trump’s mantra of America First—is to continue to build up alliances and partnerships around the world. Mattis seems to be very much in line with the traditional liberal internationalist thinking that has dominated Washington since the end of the Second World War—and which has gone into overdrive since the end of the Cold War.

“We are following the example of the Greatest Generation coming home from the tragedy of World War II and who looked around and they said, ‘What a crummy world.  But we're part of it whether we not -- whether or not we like it.  And we're going to do something about it.’” Mattis said.

“And in that spirit, they built alliances and partnerships. In the same spirit today, we are strengthening alliances and building new partnerships, whether it be NATO, the counter-ISIS coalition, the 39 nations standing together in Afghanistan, or extending friend and partner bonds in the Indo-Pacific region.”

The Pentagon’s third line of effort is to spend its money more efficiently so that the American taxpayer gets the best bang for the buck.

“Rework our business practices to gain full benefit from every dollar spent on defense,” Mattis said. “We are taking aggressive action to reform the way we do business, and to gain and to hold the trust of the Congress and the American people, that we are responsible stewards of the money allocated to us, and that it translates directly, every dollar, into the defense of our country and what we stand for.”