The U.S. Military Is Turning Old-School Helicopters into Deadly Drones 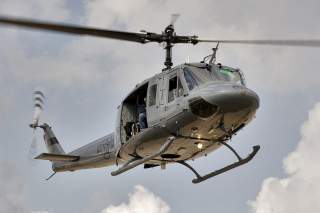 The legendary Bell UH-1 Iroquois helicopter, otherwise known as the Huey, has done it all. It has served as military transport, helicopter gunship, medical evacuation, search and rescue, special operations, and antisubmarine warfare. Pretty much anything a helicopter can be asked to do, the Huey has done.

But now, is the Huey to become a drone?

That’s quite a sixtieth birthday present for the Huey, which made its first flight in 1956. More than a helicopter, the Huey is a cultural icon, the most famous symbol of the Vietnam War. But even beyond Vietnam, the Huey was a prolific aircraft. It ranks as the most widely produced of all Western helicopters. Between 1956 and the 1980s, almost twelve thousand Hueys were built, plus another twelve thousand Bell 204s and 205s, the civilian version of the Huey.

Now unmanned aircraft manufacturer Aurora Flight Sciences has a plan for the Huey to essentially fly itself as an autonomous robot by 2018.

It’s all part of a U.S. Navy Office of Naval Research project called Autonomous Aerial Cargo/Utility System Program, or AACUS, which aims to turn any manned helicopter into a robotic flying machine at will.

AACUS isn’t an aircraft, but rather a kit. Install the system in a rotary-wing aircraft like the Huey, and the helicopter can fly cargo to a destination on its own, with only minimal control needed from a ground operator. Flip a switch, and a human pilot can hop into the cockpit and fly it as a normal chopper. AACUS combines sophisticated software with lidar, or laser radar, to detect obstacles around a landing zone and enable the helicopter to land on the ground instead of in the trees.

AACUS is being developed for the U.S. Marine Corps. The goal is to make it so grunt-friendly that an ordinary Marine can operate the controls with little training. Just tell the helicopter where to go, and the computer takes care of the rest.

It’s easy to see why the Marines, or any other military organization, would want this. If a remote outpost or a distant patrol needs aerial resupply, a human pilot now has to fly cargo in, despite hostile fire, bad weather and worse terrain. So why not have a robot do the dirty and dangerous work?

For the AACUS project, Aurora has developed its Tactical Autonomous Aerial Logistics System (TALOS). TALOS has been tested on the Boeing H-6U, an unmanned version of the MH-6 Little Bird used by U.S. special operations forces, and the Bell 206, a civilian version of the OH-58 Kiowa scout helicopter. AACUS will conclude with a TALOS demonstration on a Huey.

In fact, AACUS is part of a trend toward creating aircraft that can mostly fly themselves. Older drones, like the Predator, really are unmanned aircraft that require a pilot on the ground to fly the aircraft continuously. But the U.S. military, and companies like Amazon, are developing drones that can fly autonomously with minimal direction from the ground. Already, the airliner-sized RQ-4 Global Hawk surveillance aircraft flies a preprogrammed flight path, with pilots in the ground control station only intervening as needed to change course, speed and altitude.

All of which means that humans are becoming managers of aircraft rather than pilots. Not totally out of the loop, but not totally essential, either.

As for the Huey itself, the fact that AACUS testing will conclude with the UH-1 is interesting, simply because there are so many Hueys still flying out there. The Army has retired its Hueys in favor of the UH-60 Blackhawk. But after decades of trying to decide on a replacement, the Air Force is still flying its sixty UH-1Ns. The Marine Corps flies the UH-1Y Venom (or “Super Huey”) as its standard utility helicopter. Numerous militaries around the world fly Hueys, from Brazil to Lebanon to various African nations.

Perhaps becoming a robot will give the UH-1 a new lease on life. And the Huey will continue to grace the skies.