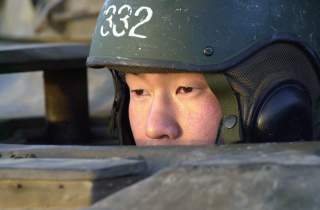 As North Korea continues its relentless pursuit towards acquiring intercontinental ballistic missiles (ICBM) capable of delivering a nuclear weapon to the American homeland, the United States is seeking a new tool to shoot them down.

This week the Missile Defense Agency published a request for information (RFI) asking for proposals for a High Altitude Long Endurance (HALE) unmanned aircraft equipped with lasers to destroy ballistic missiles during their boost phase. Among the requirements MDA is looking for are drones that fly at altitudes greater than sixty-three thousand feet, with flight endurances of at least thirty-six hours, not counting the notional three-thousand-kilometer (1,864 miles) flight from the airbase to their station upon completing the mission. In addition, proposed drones should be able to cruise at speeds of Mach .46 while patrolling, have a payload capacity between five thousand and 12,500 pounds, and “power available for the payload of at least 140 kW and as much as 280 kW for greater than 30 minutes with no loss in platform altitude.”

The proposal leaves little doubt that the drones will be used to counter threats in the Asia Pacific. As the RFI puts it, “proposed aircraft should be able to maintain continuous positive ground control and are expected to operate from the Pacific Missile Range Facility in Hawaii and Edwards AFB in California.” The timeline that the MDA is aiming for is 2023, although it is also interested in “mid-term solutions that demonstrate significant progress toward achieving these performance parameters.”

The Pentagon has long been interested in using directed energy—lasers—to enhance defensive systems. Most notably, the USS Ponce features a small thirty-kilowatt laser that can shoot down small drones and speedboats like the ones Iran would use as part of its swarming tactics to destroy U.S. ships in the Persian Gulf. MDA previously had a similar program to one in the new RFI that used manned aircraft to counter ballistic missiles. Secretary of Defense Robert Gates scrapped that program, called the Boeing YAL-1 Airborne Laser Testbed, citing technological and operational limitations.

Since then the military has been at work trying to mature the technology. The key challenge is creating a laser that is powerful enough to destroy a ballistic missile but small enough to fit on a drone or aircraft. “That’s why we’re pursuing the technology in terms of trying to mature, not just the technology, but drive the size and weight down and we can start to think operationally about what that means,” Vice Adm. James Syring, the director of MDA, said last year at a space and missile defense forum.

If the military can get the technology right, directed energy could be a boon for America’s missile-defense capabilities. One of the major challenges of current missile-defense systems is that the interceptors used to destroy the ballistic missiles cost far more than the missiles themselves. This puts the cost equation decidedly in favor of the aggressor, who can simply resort to using more missiles than any defender can field. Speaking to this issue last year, Katrina McFarland, at the time serving as the Army’s acquisition chief, stated: “We have to deal with the fact that our interceptors are more costly. The cost dimension of warfare must be switched from our side to the adversary side.”

As an interim step to the laser-equipped HALE UAV, MDA and defense contractors have already reportedly begun conducting directed-energy airborne laser tests from existing drones like the Predator and Reaper, and MDA is aiming for low-power flight tests by 2020 and beam-stability testing by 2021. In reporting on MDA’s new RFI, IHS Jane’s suggested that a derivative of Northrop Grumman’s RQ-4 Global Hawk would best meet the requirements listed in the proposal. Still, immense technological challenges remain. Besides miniaturizing a laser powerful enough to destroy the missile, the drone must be able to accurately and ID and track the ballistic missile during the short time it is in boost phase. Another challenge is that the UAV itself cannot be vulnerable to being shot down by enemy defenses.

Meanwhile, North Korea’s quest to build an ICBM continues, with the reclusive state testing a ballistic missile every week or two. Last weekend, an editorial in North Korea’s official media declared: “The series of recent strategic weapons tests show that we are not too far away from test-firing an intercontinental ballistic missile.” It added: “The great success of test-firing an intercontinental ballistic missile, which we are sure to achieve, will mark a historic watershed moment in the failure of the U.S. hostile policy against us. Historically speaking, the U.S. has never dared to go to war with a country that possesses nuclear weapons or ICBMs.”

Thus, the race between North Korea trying to field an ICBM and America trying to shore up its ballistic-missile defense continues.