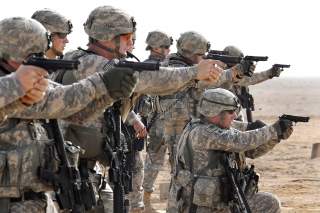 Noise-canceling headphones have become a familiar sight. Fastened over the ears of music lovers and airliner passengers, they use sound waves to cancel out the roar of outside noises such as jet engines.

Now the Pentagon wants to use that same technology to develop a quieter rifle bullet that will prevent the enemy from determining the location of the U.S. soldier who fired it.

The Department of Defense research project, titled “Active Noise Control for Small Caliber Ammunition,” aims to apply advances in noise cancellation to the battlefield. The solicitation notes that while noise suppressors fitted to a rifle can dampen the bang of a weapon being fired, “bullets traveling near or greater than the speed of sound generate a ballistic crack or sonic boom. This is the sound which is generated outside of the weapon and cannot be addressed by a simple weapon suppressor.” A round from a 5.56- or 7.62-millimeter rifle generates about 164 decibels for someone standing three feet away from the weapon (a vacuum cleaner generates about seventy decibels).

The solicitation doesn’t advocate a specific technology. But whatever solution is offered by defense contractors will have to satisfy a series of questions: Will it allow the development of projectiles previously deemed too loud for use? Will the solution affect marksmanship training? Will it affect the ability of soldiers to give and hear orders on a noisy battlefield? What about how far the sound travels? Will a quieter bullet reduce the effect of covering fire on making the enemy duck their heads?

The Pentagon admits there are several technical challenges. It wants a meaningful reduction in both the sound of the bullet being fired and the sound as it flies through the air. Yet the solution should not affect the ability of the projectile to accept electronics now being fitted to smart bullets. Perhaps most important, a quieter bullet shouldn’t result in a less lethal weapon.

For now, the Pentagon isn’t interested in quieter pistol bullets, but it is interested in whether noise-canceling technology can be applied to larger crew-served weapons such as machine guns.

Phase I calls for developing a concept of how a noise-canceling bullet can “mask or shift the noise of a rifle in a way in which the source and direction of fire will be difficult to determine.” Phase II calls for a prototype “to evaluate source location/direction phase shift and below Mach 1 sound masking.”

Also interesting, and perhaps a little disquieting to some, is that the Pentagon notes the possibility of dual-use applications for noise-canceling bullets, “including state/local governments, and commercial.” In addition, “Potential opportunities may exist to produce technologies which will reduce hearing loss in high intensity sound environments.”