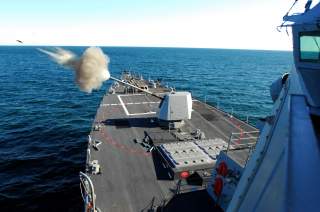 One of the less known ripple effects of North Korea’s latest round of saber rattling is it provides the US military with reasons to speed up development of a next-generation artillery shell that travels extreme distances at four-times the speed of sound.

Yes, they can target missiles. The two-foot long shells, known as hypervelocity projectiles or HVPs, have been under operational tests since 2016 and as they travel in excess of 5,000 mph, hit targets with the impact of a freight train.

Because the next-generation shells are precision-guided and travel at such extreme speed, they can hit targets as far as 100 miles away in 72 seconds, markedly reducing options to evade.

What’s more, they can be fired off at 20 rounds per minute at targets, including moving ones, from modified artillery already in operation.

These include the US Navy’s 5-inch, ship-mounted guns as well as the US Army’s Paladin 155-mm howitzer, known as powder guns in military parlance. Standard artillery shells have a range of less than 20 miles.

That adds up to a lower cost for an anti-missile defense capability, said former US Deputy Secretary of Defense Bob Work during a 2015 speech at the US Army War College.

“We always think about THAAD (Terminal High Altitude Antimissile Defense) and PAC-3 missiles. All of the modeling right now is telling us that every single Army artillery piece using powder guns, using these advanced guided munitions (HVPs), will be able to knock down heavy missile raids,” Work said.

In effect, this means every US Army 155 mm howitzer could be adapted to HVP use to counter cruise missile and tactical ballistic missile threats in any corner of the world, including North Korea.

Will Roper, the Pentagon’s Strategic Capabilities Office director, has said publicly in the past year that the HVP project is “a fantastic program” that will significantly lower the cost of missile defense.

BAE Systems has developed a HVP that is 26 inches long and weighs between 40 and 50 pounds, including a 15-pound payload. It is not the size, but the extremely high velocity that enables the HVP to deliver a devastating hit on its target.

That said, the US military is not alone as China and Russia as well as other countries such as India are pursuing HVP’s.

However, Israel is believed to be at the head of the pack and there are unverified reports that the country has a working HVP capable of hitting a target at a speed in excess of Mach 10.

The US plans call for Army and Navy demonstrations by next year of HVP-based missile defenses. Traditional 5-inch naval guns and US Army howitzers will fire HVP rounds, perhaps guided by a specially modified variant of a US Air Force aircraft radar.

US Defense Department spokesman Lt. Col. Roger Cabiness said in an email that the HVP team composed of the Strategic Capabilities Office and the Army, has made consistent progress in development.

“The first prototypes were fired in February 2016 at the White Sands Missile Range in New Mexico. Since then, the team has completed dozens of additional test shots,” said Cabiness.

He said the military services will determine the time of deployment of the HVP following conclusion of tests, in response to a question if the new shell may be in use on US Navy vessels as early as 2019.

Cabiness declined to comment on the status of China and Russia’s development of HVPs, though wouldn’t rule out the US sharing the technology with Japan and other allies in the Pacific.

“As the HVP team continues to mature and transition projectile technology, it will assess opportunities for mutually beneficial international participation in the program,” Cabiness said.

Still, the use of HVPs in powder guns is just a stepping stone in the ongoing development of so-called electromagnetic rail guns.

These devices, known as EMRGs, use an enormous jolt of electrical power to fire HVPs rather than gunpowder or chemical explosives.

The HVPs load via a sliding metal carriage suspended between two rails within a magnetic field.

The ability to create, store and then instantly generate the electrical energy to fire is key to achieving the EMRG’s objective of also launching shells at more than 5,000 mph without the need for explosive charges.