The U.S. Military's Greatest Fear: Russia and China are Catching Up Fast 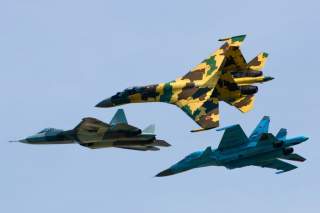 The United States has fallen behind potential adversaries in certain key technological areas such as integrated battle networks according to senior U.S. Navy officials. Indeed, as one U.S. Navy admiral told an audience at the Navy League’s Sea, Air and Space symposium that the term “near-peer” is a misnomer—in some cases the Russian and Chinese have the advantage over American forces.

“Our near-peer competitors are no longer near peers,” said Rear Adm. Mike Darrah, Naval Air Systems Command’s program executive officer for unmanned systems and strike weapons. “In some cases, they have gone beyond us.”

While Darrah was reluctant to go into details, he said that one specific area where the United States is falling behind is in networking. But he reiterated that the term “near-peer” is condescending and derogatory—which also has the effect of rendering American policy-makers complacent when dealing with a very real danger. It was a message that others Navy leaders like NAVAIR Strike Weapons program manager Capt. Jamie Engdahl also reiterated—the United States is not fielding advanced weapons fast enough to keep up with other nations technical advances.

Darrah—due to security concerns—flatly refused to answer what the United States could do to counter the enemy’s advantage. But he did talk about specific areas where the United States needs to improve on—one such area is combat identification, especially in an environment where enemy electronic attacks will be continually disrupting American communications networks. “We’re not doing a good enough job at combat ID,” Darrah said.

Position, navigation and timing in an environment where there is no access to GPS—or where the enemy is actively attacking satellite navigation—is another area the Pentagon must work on. American forces are far too reliant on GPS, and a smart adversary like the Russians or the Chinese are certain to attack those vital sinews that hold together U.S military operations.

Addressing those issues is critical as the Navy moves toward the so-called “tactical cloud”—where every sensor and shooter shares data seamlessly. However, such networks are vulnerable to electronic and cyber attacks and—as such—Darrah said much more needs to be done to ensure the fidelity of the information in the cloud. Networking is the future of naval warfare, Darrah reiterated, noting that as times goes on individual platform will matter less than the sum total of the tactical cloud.

Dave Majumdar is the defense editor of The National Interest. You can follow him on Twitter at @DaveMajumdar.