The U.S. Military's Mission Is Clear: Crush Russia or China in a War 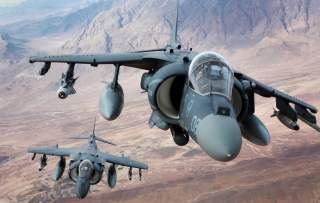 The Pentagon’s new National Defense Strategy is refocusing the U.S. military onto traditional great power conflicts against nations such as Russia and China while still fighting terrorism. The new document, which was released last week, is the Pentagon’s first national defense strategy in over 10 years.

“The world, to quote George Shultz [former Secretary of State under Reagan], is awash in change, defined by increasing global volatility and uncertainty with Great Power competition between nations becoming a reality once again,” Defense Secretary James Mattis told an audience on Jan. 19. “Though we will continue to prosecute the campaign against terrorists that we are engaged in today, but Great Power competition, not terrorism, is now the primary focus of U.S. national security.”

Mattis said that Russia and China are increasingly challenging the United States for dominance and Washington must respond accordingly. “We face growing threats from revisionist powers as different as China and Russia are from each other, nations that do seek to create a world consistent with their authoritarian models, pursuing veto authority over other nations' economic, diplomatic and security decisions,” Mattis said. “Rogue regimes like North Korea and Iran persist in taking outlaw actions that threaten regional and even global stability.  Oppressing their own people and shredding their own people's dignity and human rights, they push their warped views outward.”

However, even as authoritarian regimes rise, the United States still has to contend with terrorism. “Despite the defeat of ISIS' physical caliphate, violent extremist organizations like ISIS or Lebanese Hezbollah or al Qaida continue to sow hatred, destroying peace and murdering innocents across the globe,” Mattis said.

Even as the United States grapples with those threats, Washington’s technological edge over would be challengers are starting to erode. “In this time of change, our military is still strong.  Yet our competitive edge has eroded in every domain of warfare, air, land, sea, space and cyberspace, and it is continuing to erode,” Mattis said. “Rapid technological change, the negative impact on military readiness is resulting from the longest continuous stretch of combat in our nation's history and defense spending caps, because we have been operating also for nine of the last 10 years under continuing resolutions that have created an overstretched and under-resourced military.”

Mattis’ solution is to build a more “lethal” military and double down on America’s alliance network, which seems to contradict the White House’s approach to the problem. “We're going to build a more lethal force.  We will strengthen our traditional alliances and building new partnerships with other nations,” Mattis said. “And at the same time we'll reform our department's business practices for performance and affordability.”

But even as he talked about building new partnerships with allies, Mattis noted that the United States has carried most of the military burden of maintaining the liberal international order. That can no longer continue as is. “We carried a disproportionate share of the defense burden for the democracies in the post-World War II era,” Mattis said.  “The growing economic strength of today's democracies and partners dictates they must now step up and do more.”

Mattis says that America’s allies are starting to pull their own weight. “I'm very encouraged by what I've seen, and we could not be better served than by [NATO] Secretary General Jens Stoltenberg, there in Brussels, with our primary alliance,” Mattis said. ‘The way he leads that alliance is one where we all have to work together and do our fair share.”

Time, of course, will tell if America’s allies will eventually pull their own weight. But, thus far, history shows that allies like Germany are unlikely to do so.