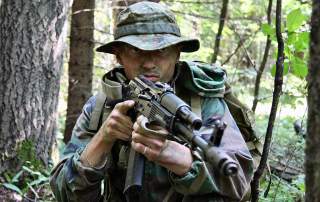 Good news for Russian soldiers: not only will a miracle cloak make them invisible, but it will make them germ-free, too.

“The obtained filter material by far exceeds all existing analogues in its ability to stop the most dangerous aerosol particles such as viruses, toxins, allergens. This technology could usher in a wide variety of protective materials for medical, military and other purposes,” Grigoryev told the site.

The “invention can also be used to obtain super lightweight and efficient elements of a soldier’s outfit to make them almost invisible,” Sputnik reported.

The article did not explain how a material that blocks germs also happens to confer invisibility. One possibility is that a material that stops microscopic organisms somehow also blocks or deflects electromagnetic energy such as light.

Future Fund seems to aiming its product to the sports world as much as the military. “We are already working closely with potential users, including military, and also with the producers of outfits for Polar regions, active leisure and extreme sports,” Grigoryev said. “We expect to complete field trials of our material before August 2017.”

This isn’t the first time that Russia has touted the ability to make people disappear. Last year, Russian scientists announced a “stealth cloak” made of a lightweight and flexible material that would both protect electronic equipment from enemy jamming and mask electromagnetic emission from that equipment. “The material can be used to protect the electronic equipment employed by ground and naval forces, and to help ensure the well-being of personnel stationed at facilities with high electromagnetic radiation field levels,” reported Sputnik News. “The fabric can also be used in medicine—for example, in areas with diagnostic, therapeutic and decontamination equipment.”

Russia is hardly alone in developing invisibility. Several nations, including the United States, are pursuing the concept. However, it is important to remember that invisibility in this context is not the same as the ghostly protagonist in movies like The Invisible Man, or the Romulan (and later Klingon) cloaking device from Star Trek. In the first Star Trek episode where it was introduced, 1966’s “Balance of Terror,” Mr. Spock suggests the Romulan device works by the “selective bending of light”—but note that the Enterprise was still able to track the general location of the Romulan ship as it moved.

What’s likely to emerge from twenty-first-century military workshops is a lot less exciting but probably more practical. Defense contractor BAE has demonstrated technology that masks vehicles—but only against thermal sensors. Japanese scientists have displayed a coat that has cameras that project imagery of the surrounding environment onto the garment, effectively making the user look like he isn’t there. Metamaterials, which sound somewhat like Romulan cloaking technology, do indeed bend light rays around the user.

The end result probably won’t be total invisibility—the kind you see in Hollywood movies where the invisible hero punches out bad guys who can’t see what’s hitting them. Most likely it will be a partial invisibility, sort of like stealth technology on aircraft. It will reduce the chance of detection against certain types of sensors, at certain ranges and under certain conditions. Useful, but far from the Invisible Soldier.