The U.S. Military's Ultimate Weapon Is Almost Here: The 'Swarm' 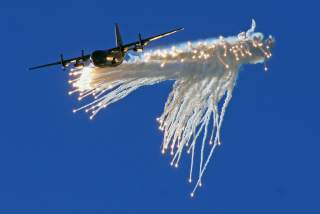 Using fast-developing computer algorithms for autonomous flight engineered to prevent mini-drones from crashing into one-another, the swarms are intended to perform a wide-range of strategically relevant missions.

The Pentagon’s once-secret Strategic Capabilities Office (SCO), aimed at harnessing promising technologies for nearer-term development than most acquisition programs, has already launched these drones from F-16 and F-18s numerous times in testing.

The mini-drones, called Perdix, are government designed yet built with commercial off-the-shelf elements.  William Roper, who reports to Defense Secretary Ashton Carter as the Director of the Strategic Capabilities Office, said the effort was showing promise for possible near-term combat advantage.

“They are expendable and fly low as a surveillance asset. You can have a lot of them for a saturation approach. Saturating has an advantage over the thing it has to defend against. Its defender has to take more time and money to defend against it,” Roper told a small group of reporters.

While Roper did not wish to openly discuss the particular sensor technologies used by Perdix, he did explain that they could be quickly launched from an aircraft’s flare dispensers.

“If you go and walk around a fighter jet to pop trunk there is not a lot of storage in a fighter but the one place you can fit an expendable is in the flare dispenser because a flare is an expendable. There is a place that it sits in a canister and there is a button that makes them dispense,” Roper said.

Test results and data for further development are now being analyzed as part of an effort to modify designs if needed.

While launching drone swarms are showing promise, there are a number of key limitations to Perdix; the Pentagon can launch expendable mini-drones but has not yet been able to engineer mini-drones that can return to the aircraft from which they are launched. In addition, although they do provide a distinct cost advantage compared with many weapons which would defend against it, the small drones have limited range, Roper added.

The small drone is, however, created to deal with both enemy weapons and extreme temperatures, Roper said.

“The numbers for speed and endurance are not what the capability should be. It gives commanders a little bit of surprise about what big aircraft can do,” he said.

The outer-mold of Perdix is created with 3D printing to both allow for rapid production and lower costs.

The Pentagon’s SCO, which works closely with the military services to develop the technologies, was created to help circumvent the often lengthy, expensive and bureaucratic formal acquisition process.

“It will be important for us in SCO is to play the role of cross service connector. Often people who have never met are natural partners. There is a synergy,” Roper explained.  “We don’t hold the copyright on innovation. We want to give Cocoms (combatant commanders) the biggest advantage they could have. We take a risky concept and turn it to a point when we can hand it over.”