The U.S. Military's V-22 Osprey: “Everything Is An Option” 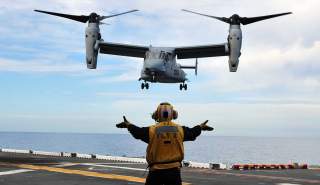 The service wants the tanker capability for its fleet of Osprey so that the tilt-rotors would be able to extend the range of the Marines’ F-35B Joint Strike Fighters—which is becoming an increasingly important factor in the Pacific theatre. Dubbed, the VARS—V-22 Aerial Refueling System—the idea is for the Ospreys to top-off the F-35Bs as they takeoff from a large-deck amphibious assault ship with a full load of weapons but not fuel. The Ospreys would also be able to refuel the jets as they return—acting as a recovery tanker.

“The way the Marine Corps has asked for this capability—so you can envision a Joint Strike Fighter coming off an amphib in vertical mode, they can go heavy on ordnance, light on gas,” John Parker, Boeing’s global sales manager for the Osprey told reporters on March 28. “Once they takeoff, the V-22s are overhead to top them off, so they now have the full range and full ordnance to do the strike package.  And, oh, by the way, the V-22 can refuel...them coming back in.”

Parker said that the VARS system is funded and development is proceeding apace. The Marine Corps has indicated to Boeing that it wants to deploy the VARS in conjunction with the its F-35Bs in 2019 or later in 2020. The addition of the refueling package would greatly increase the reach of the Navy/Marine Corps expeditionary strike groups—effectively turning those units into small carrier strike groups in many respects.

But Bell-Boeing has not finished with tapping the V-22’s potential. Even with the aerial refueling capability, the Marines would still eventually need an airborne early waning (AEW) capability, which the L-class ships currently lack. Thus, Parker said that Boeing and its engineers are working on a roll-on/roll-off AEW package as well as an anti-submarine warfare (ASW) package, but those are still a few years down the line. There has been significant customer interest for both packages, Parker said.

Parker could not offer any details about the potential performance of a V-22-based AEW system—but it would not be a “poor man’s E-2D.” The ASW package—could be of interest to the U.S. Navy—because the service divested its last fixed-wing carrier-based ASW assets during the late 2000s when the last Lockheed Martin S-3B Viking was pulled from service. However, with the resurgence of the Russian undersea fleet, many have argued for the U.S. Navy to rebuild much atrophied ASW capabilities.

Parker also noted that the Marines and the Air Force are eventually planning on adding more offensive weapons on to future V-22 upgrades. Some of the more ambitious plans could seen various bombs and missiles launched from the Osprey beyond what has currently been disclosed, Parker said. Indeed, he would not rule out directed energy weapons as part of a future weapons package. “We are looking at all sorts of things,” Parker said. “Everything is an option.”