The U.S. Navy Is About to Get Its Hands on the Most Powerful Aircraft Carrier Ever 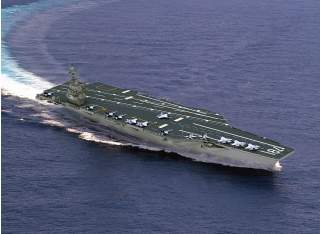 After some schedule delays and challenges integrating first-of-its kinds technologies, many have been awaiting word on the anticipated schedule for the USS Ford, the first Ford-class aircraft carrier. The Navy has now announced that the ship is slated to deliver in April of this year.

The Navy Released the following statement from spokeswoman Capt. Thurraya Kent -- with the Asst. SECNAV for Research, Development & Acquisition:

"GERALD R. FORD (CVN 78)  is 99 percent overall complete with 93 percent of the test program complete (93 percent Hull, Mechanical & Electrical, 92 percent propulsion testing, and 93 percent electronics testing).  Over the past few months, we have made significant progress resolving first-of-class issues associated with these critical systems and have resumed critical path testing in support of Builder's Sea Trials.  This progress enables us to forecast our sea trials and delivery schedule.  Specifically, we have updated the ship's schedule to reflect Builder's Sea Trials in March 2017, Acceptance Trials in April 2017, and Delivery in April 2017, pending the results of sea trials."

Once its delivered, the new carrier will go through “shock trials” wherein its stability is tested in rough waters caused by explosions; the ship will also go through a pre-deployment process known as “post-shakedown availability” designed to further prepare the ship for deployment.

As technology evolves, laser weapons and rail guns may eventually replace some of the missile systems on board aircraft carriers, Navy leaders have said.