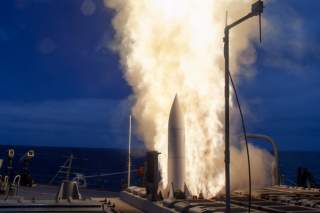 The Navy's Standard Missile 6 exploded, destroyed and sank a surface ship target in a test several months ago off the coast of Hawaii, providing additional strategic relevance for an new offensive use of a missile previous oriented toward air and ballistic missile defense, Raytheon and Navy officials said.

"The anti-surface warfare test proved that SM-6 could attack a surface ship. It destroyed a Perry-class fast Frigate. The big deal for us is that the SM-6 proved its capability with sea targets," Mike Campisi, SM-6 Senior Director, Raytheon, told Scout Warrior in an interview.

The test, which took place at Pacific Missile Range Facility, Hawaii, involved the rare event of an actual destruction and sinking of a decommissioned or retired Navy ship.

The firing of the SM-6 was designed to analyze new software configurations on the missile, giving it an ability to track and destroy targets on the surface of the water - as opposed to its typical use of hitting or intercepting incoming enemy fire from the air above a ship or near the earth's atmosphere as a ballistic missile defense weapon.

Using the SM-6 as an offensive weapon against surface targets is a new application for the Navy, bringing another kind of surface fire-power to the fleet. The SM-6 is larger than the SM-3 interceptor and is designed to destroy closer-in air targets. However, this test launches the ability for the SM-6 function in an additional capacity as an offensive weapon against a wide range of surface targets.

"The entire system was tested at this time. It performed exactly as we expected and the result more than met our expectations. We added to the sea- based terminal capabiity (ballistic missile defense) and anti-air defense," Campisi added. "In effect,m this will allow the fleet to attack ships with offensive capability and prove out the flip side of area defense -- which is distributed lethality."

The software adjustments to the missile allow a single SM-6 to perform all of its different functions, he explained.

"The system will identify a target and send a signal to the target. Based on the signal, it chooses the software path and the activities it is going to perform in engaging its mission," Campisi said.

The SM-6 weapon has been operational since 2013; the Navy has at least 250 of the missiles in its arsenal. The service recently awarded Raytheon a $270 million deal for 2016 SM-6 production.

The SM-6 is unique in several respects; the weapon uses what is called an "active" seeker, meaning it can send a signal or electromagnetic ping forward in addition to receiving them. This gives the missile to better attack manuering or moving targets at sea, because it does not need to rely upon a ship-based illuminator to bounce a signal off a target for a merely "passive" seeker to receive. This technology also allows a ship commander to fire several SM-6 missiles in more rapid succession or closer to one another in the event that a target needs to be attacked with more than one missile.

An emerging Navy technology called Naval Integrated Fire Control - Counter Air, or NIFC-CA, also relies upon the SM-6 to help identify, track and destroy approaching anti-ship cruise missiles from distances beyond the horizon. The NIFC-CA system, which was first deployed last year, also relies upon an airborne sensor to relay a signal from an approaching enemy target.

The SM-6 is configured to fire from Navy Cruisers and Destroyers out of a Vertical Launch System tube; although there is not yet a ship deck-mounted launcher for the missile, it appears conceivable that the Navy could explore an option along these lines. This would enable the weapon to fire from a wider range of ships such as the Littoral Combat Ship, Frigates, Amphibious Assault Ships or even Aircraft Carriers.

The development of this weapon, along with other missiles and emerging offensive and defensive technologies, is entirely consistent with the Navy's "distributed lethality" strategy; this ongoing effort aims to better arm ships with next-generation communications technology and cutting-edge, longer-range offensive and defensive weapons. This is informed by a series of key concepts such as efforst to better enable surface ships to conduct open or "blue" water combat against a near-peer adversary, sustain the Navy's global technological edge, hold enemies at risk from farther distances and allow surface ships to both "aggregate" and "distribute" or disperse as needed as a way to reduce the prospect of a successful enemy attack.