The U.S. Navy Could Attack North Korea from Stealth Submarines (With Almost No Warning) 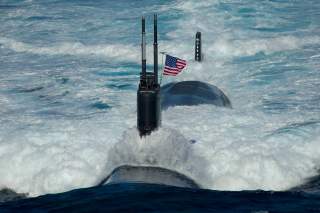 The United States is continuing to up the ante in its confrontation with North Korea.

"The Korean-American relationship is very important and our visit to Chinhae gives us the opportunity to strengthen the outstanding relationship that exists between the U.S. and the Republic of Korea," Cmdr. Chad Hardt, Tucson’s commanding officer said. "My crew and I are looking forward to experiencing the exciting culture of this great Korean city."

Tucson is not one of the top of the line Seawolf-class (of which only three were built due to their sheer expense) or new Virginia-class submarines (of which only 15 have been completed), rather the vessel is part of the long-serving Los Angeles-class, which still makes up the bulk of roughly 52 SSNs in the U.S. Navy fleet. Indeed, Tucson is the 59th 688-class boat to be built and was the 20th Improved Los Angeles submarine to be completed. Though no longer representing the state of the art for attack submarine design, Tucson and the other 688-class boats are the workhorses of the fleet.

Improved Los Angeles-class submarines like Tucson—like the later Virginia-class—are equipped with twelve vertical launch tubes to carry Tomahawk cruise missiles. Unlike many other U.S. military assets, submarines–which are some of the stealthiest platforms anywhere—can close in to launch their cruise missiles with effectively no warning. As such, a weapon such as an attack submarine can keep the enemy guessing as to where a missile strike will come from.

In the case of North Korea, Tucson’s presence in the waters off the Korean peninsula serves as a warning to Pyongyang to moderate its behavior.