The U.S. Navy Has Big Plans to Replace the Tomahawk Cruise Missile 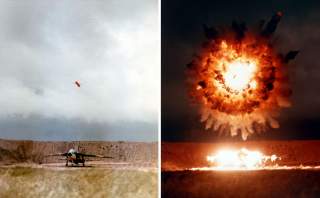 The United States Navy will keep the Tomahawk cruise missile in its inventory through 2040, but the service will start to develop a next-generation replacement weapon that will be able to strike targets both at sea and on land. In the meantime, the venerable cruise missile will receive an anti-ship capability—an ability that was lost when a ship-killing version of the Tomahawk was retired in the 1990s.

“This recertification program will increase missile service-life by an additional 15-years (total of 30-years) and enable the Department to support Tomahawk in our active inventory through the mid-late 2040s. In concert with our recertification program we will integrate modernization and technological upgrades and address existing obsolescence issues. In addition, we are developing a Maritime Strike Tomahawk capability to deliver a long-range anti-surface warfare capability.”

But as rival great powers build up their naval forces, the Navy is also building up additional anti-ship warfare capabilities.

In the short term, the Navy will field the Offensive Anti-Surface Warfare missile Increment 1—which is better known as the Long Range Anti-Ship Missile—but it will also develop a longer-term solution for the post-2025 era.

“We intend to develop an air-launched OASuW/Increment 2 weapon to address long-term ASuW threats and a surface and submarine launched Next Generation Land Attack Weapon (NGLAW),” Davis, Grosklags and Miller wrote.

“NGLAW will have both a long-range land strike and maritime ASuW capability that initially complements, and then replaces, the highly successful Tomahawk Weapon System.”

The NGLAW will be a long-range weapon designed to hit targets too dangerous for manned aircraft or to clear a corridor for those jets—much like the service’s current doctrine for the Tomahawk.

“The Next Generation Land Attack Weapon (NGLAW) will provide the next generation of long-range, kinetic strike to destroy high-priority fixed, stationary and moving targets – as well as those targets hardened, defended or positioned at ranges such that engagement by aviation assets would incur unacceptable risk,” Davis, Grosklags and Miller wrote.

“NGLAW will be capable of kinetic land and maritime attack from surface and sub-surface platforms and initially complement, and then eventually replace, the Tomahawk Weapon System.”

The Navy estimates that the NGLAW will be operational around 2028 to 2030. The Navy has requested $9.9 million for the NGLAW in fiscal year to 2018 to transition the effort into a formal program of record.